Minister Accused Of Sleeping At Briefing On Child Deaths. His Explanation

At least 100 children have died of encephalitis in Muzaffarpur over a period of 16 days, and 300 others who contracted the disease continue to languish in local hospitals. 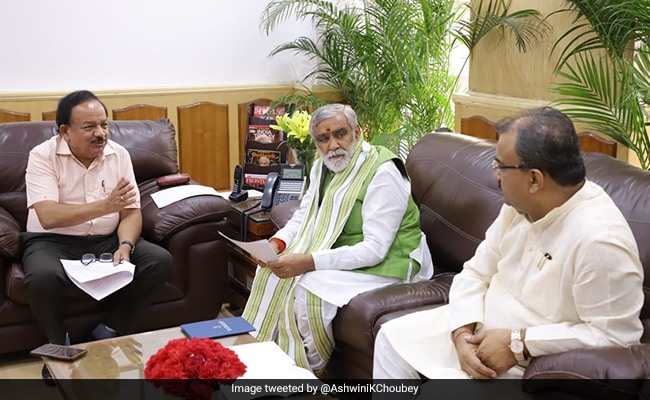 Ashwini Kumar Choubey said he was in "deep thought" over ways to resolve the issue.

Allegations by opposition parties that the government was sleeping on its job while encephalitis-related deaths mounted in Bihar took a turn for the literal on Sunday, when Minister of State for Health and Family Welfare Ashwini Kumar Choubey was seen with his eyes resolutely shut at a press meet organised in Muzaffarpur to address queries on the issue.

However, the minister sought to clear the air today, claiming that he was not dozing but in "deep thought" over ways to bring relief to those affected by the viral disease. "I also indulge in deep thought... I was not sleeping," news agency PTI quoted him as saying.

Photographs of Mr Choubey supposedly dozing at a press conference he was addressing along with Union Health Minister Dr Harsh Vardhan and Bihar Health Minister Mangal Pandey were circulated widely on social media, causing the Union government a lot of embarrassment. Yesterday, people greeted Dr Harsh Vardhan with black flags while he was visiting a government-run hospital to take stock of the situation.

At least 100 children have died of encephalitis in Muzaffarpur over a period of 16 days, and 300 others who contracted the disease continue to languish in local hospitals. According to official data, 83 children died at the Sri Krishna Medical College and Hospital while 17 lost their lives at Kejriwal Hospital in the Bihar city.

Encephalitis is a viral disease that causes flu-like symptoms such as high fever, convulsions and headaches in patients. The state health department has cited hypoglycemia, a condition caused by very low levels of blood sugar, as one of the main reasons for the deaths.

The Centre has promised to set up a state-of-the-art research centre within a year to tackle future encephalitis outbreaks.