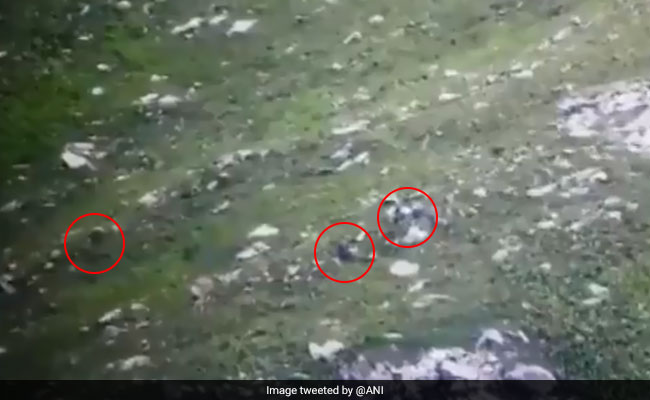 At least four Pakistani terrorists emerge slowly from behind some rocks on a grassy hill near the Line of Control (LoC) in Jammu and Kashmir's Kupwara sector. Within seconds, one of them runs back towards safety and away from the LoC as bullets fly overhead. Seeing him scurry away, the rest zigzag their way back amid bullets fired by Indian Army soldiers from a forward post overlooking the hill.

All this is seen in a video released by the Army.

The infiltration attempt happened on July 30, less than a week before the government scrapped special status to Jammu and Kashmir under Article 370 and divided the state into two Union Territories, according to news agency ANI.

The Army has been on high alert along the LoC amid reports that Pakistan has been trying to sneak in a high number of terrorists into India after the centre's move on Jammu and Kashmir. Partial restrictions are still in place and mobile internet is snapped in Kashmir valley.

Indian Army detected Pakistani terrorists near LoC in Kashmir's Kupwara sector on 30 Jul.Indian troops started firing at them as soon as terrorists were detected&forced them to return to their territory.They were attempting to infiltrate&carry out attacks on Indian positions. pic.twitter.com/WlKT9VF6Cd

Close to 500 terrorists are waiting at terror launch pads in Pakistan to infiltrate into India but the military is ready to respond "at any level, any range, anywhere", army sources said on Monday.

Security agencies are alert to intelligence reports which indicate the possibility of a major threat in the run-up to the festive season. The threat perception is stronger this year than it has been in the past few years.

On Monday, Army Chief General Bipin Rawat confirmed that Pakistan had very recently "reactivated" the terror camp in Balakot, which was bombed by India in February in response to a suicide attack at Jammu and Kashmir's Pulwama in which 40 soldiers were killed.

In another video released by the Army on September 9, an infiltration attempt by a squad of Pakistan's Border Action Team (BAT) was foiled along the LoC in Keran sector. The incident happened in the first week of August. At least five bodies of the BAT personnel and terrorists and their equipment can be seen in the video.

Later, Pakistani soldiers are seen waving a white flag as they emerged against the silhouette of a grassy knoll to retrieve the bodies of their colleagues. The white flag signified a non-hostile intention and a message to the Indian side to refrain from retaliation while the Pakistani soldiers took back the two bodies, which lay on a clearing of a foothill at Hajipir sector in Pakistan-Occupied Kashmir (PoK).