After being knocked down to the ground, the boy was seen attempting to get to his feet. He seemed unhurt but appeared to be shaken. 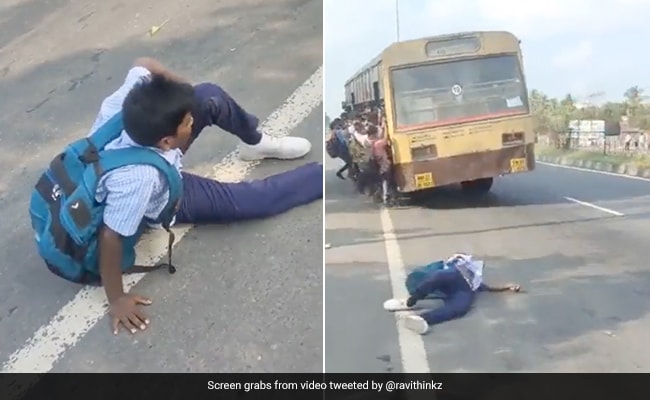 A video showing a school student losing grip and falling from an overcrowded bus is going viral on the internet. According to a Twitter post, the chilling incident took place in Tamil Nadu's Kanchipuram district.

The short clip, originally shared by Twitter user A Senthil Kumar, showed a bus tilted to the left because of the weight of the passengers hanging off its door. Moments later, it showed a boy dressed in school uniform slipping onto the road.

He was seen rolling just inches away from the back wheels of the vehicle and onto the incoming traffic.

After being knocked down to the ground, the boy was then seen attempting to get to his feet. He seemed unhurt but appeared to be shaken.

Since being shared, the video has surfaced on several social media platforms. On Twitter, it has garnered over 488,000 views.

Reacting to the clip, one user wrote, "My God!! This brought horrific memories of our school days. Scary to see such things continuing even after 3-4 decades!!" Another said, "He got damn lucky he didn't fall under the wheels."

"Safe ride means kids should get inside the bus not ride on the steps of the bus hanging by one hand and carrying a huge weight," added third. "If we can't provide safe ride to our children to school,  what is the development we had is nothing," commented fourth.

Viral Video | "Nothing Is Impossible": This Specially Abled Schoolboy Shows How

The clip prompted a response from Bareilly Police. They said in a tweet in Hindi that "legal action" had been initiated against the driver as per the rules.