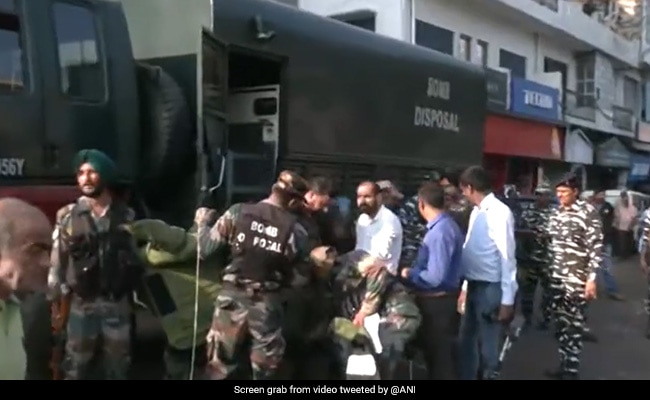 A bomb detection and disposal squad, accompanied by sniffer dogs, arrived at the site of the second blast that rocked Udhampur district in Jammu and Kashmir Thursday morning and started their investigation, officials said.

Wearing full protective gear, the squad members were seen inspecting the Udhampur bus stand area for suspected objects and explosives. It is not immediately clear what triggered the blasts and an investigation is underway.

Two blasts occurred within 8 hours in Udhampur; two people got injured in the first blast and are now out of danger, no injury in 2nd blast, says DIG Udhampur-Reasi Range pic.twitter.com/DuCnMngqZq

Two blasts rocked Udhampur within 8 hours of each other. Two people were injured in the first blast that happened at 10:30 pm on Wednesday in Domali Chowk. The injured were admitted to the Udhampur District Hospital. The blast damaged vehicles parked nearby.

The second blast struck the bus stand locality this morning but no one was injured, officials said.

"The first blast happened last night around 10.30pm in a bus parked near a petrol pump. The second one happened on a bus at the Udhampur bus stand. No injury has been reported in the second blast. Two got injured in the first blast and they are out of danger. The probe is underway," said Suleman Choudhary, Deputy Inspector General of Police (DIG), Udhampur-Reasi Range.

Meanwhile, locals led by Udhampur Congress Counselor Preeti Khajuria staged a protest against the district administration after the blasts.