The latest video is from a twin wedding, held at Pragya Thakur's Bhopal residence, of young women from very poor families. 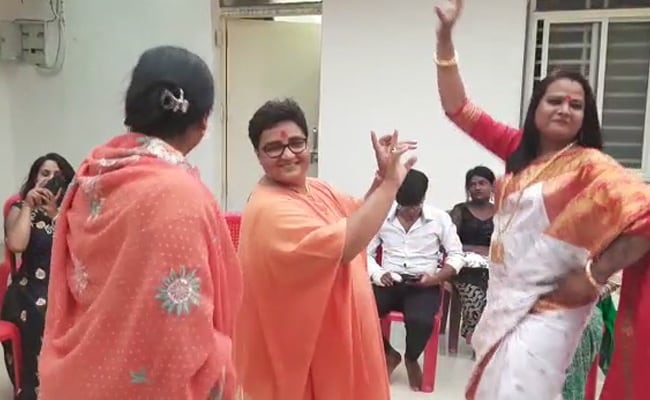 Pragya Thakur is seen shaking a leg at wedding celebration and asking people to join in.

Days after a video of Pragya Thakur's slam dunk on a basketball court went viral, the BJP MP is seen dancing at a wedding she helped organise. The videos have drawn comments from the Congress on the politician who has begged off court appearances in the Malegaon blasts case citing ill health.

The latest video is from a twin wedding - held at the MP's Bhopal residence - of young women from very poor families. Pragya Thakur, 51, is seen shaking a leg at the celebration and asking people to join in.

The brides told reporters that they were "very happy" and felt blessed.

The father of one of the brides, a daily-wage worker, said he was grateful to the Bhopal MP as he didn't have the means to organise his daughter's wedding.

"I feel like I have been given a second life. I am very poor. I did not have enough to marry my daughters. But Pragya Thakur helped us. I pray to mother goddess for her long life. I am very happy and grateful," he told reporters.

"Whenever we see the Bhopal MP, sister Pragya Thakur, play basketball and walking without support or dancing happily like this, it makes us happy...?" - tweeted Mr Saluja, who is a Congress spokesperson in Madhya Pradesh.

On July 1, Mr Saluja had shared a video of Pragya Thakur shooting a basket and had written: "We had only just seen Bhopal MP Pragya Thakur in a wheelchair but today, we feel very happy to see her trying her hand at basketball at the Bhopal stadium...So far we knew she couldn't walk or even stand properly because of an injury...? May god always keep her healthy..."

Pragya Thakur, known for controversial comments that have often embarrassed her party BJP, is an accused in the 2008 Malegaon blasts and is out on bail. She was in jail for nine years before she was granted bail in 2017.

Six people were killed and over 100 others injured when an explosive device strapped on a motorcycle went off near a mosque in Malegaon, a town about 200 km from Mumbai in north Maharashtra