Lok Sabha Speaker Om Birla said, "Flinging papers towards the Chair, disregarding the Chair is not in line with the parliamentary practises." 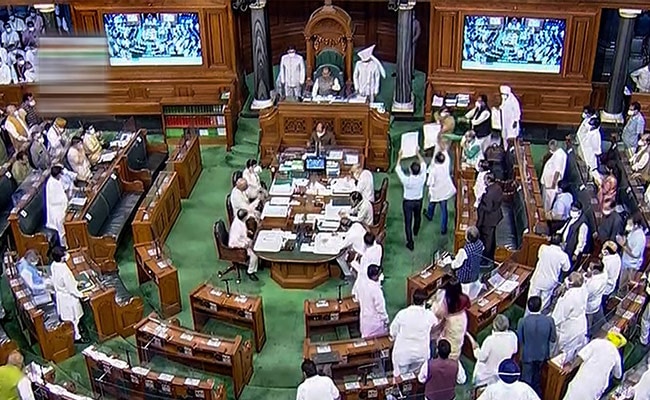 The House has witnessed repeated disruptions and adjournments since the beginning of the session.

Lok Sabha Speaker Om Birla on Thursday said he was "very hurt" over some opposition members throwing papers at the Chair a day earlier and warned of stern action against those repeatedly involved in such incidents.

When papers were being laid in the House on Wednesday, Congress members Gurjeet Aujala, T N Prathapan, Hibi Eden and some others threw business papers of the day as well as torn pieces of paper and placards at the Chair. A piece of the torn placard landed in the press gallery just above the Speaker's podium.

Soon after the House convened on Thursday, Speaker Om Birla said, "I am very hurt over the incident that occurred on July 28. Flinging papers towards the Chair, disregarding the Chair is not in line with the parliamentary practises.

He asked whether Wednesday's incident was in line with the parliamentary practises?

"I would urge the members that such actions which are not in line with the parliamentary processes... such incidents should not be repeated. If such incidents are repeated, then I would need your cooperation. I would take stern steps against such members so that we can maintain the dignity of Parliament," Mr Birla said.

The opposition parties have been staging protests over the Pegasus snooping controversy, farm laws and other issues.

"We consider this (Lok Sabha) as the temple of democracy. It also gives a sense of confidence that the Chair will do justice to everyone and remain impartial. If there is any question related to the Chair, you can tell me in the chamber. I will try to accept your suggestions to maintain the dignity of the Chair. But we must collectively decide on how do we enhance the dignity of the House," Mr Birla said.

'Bluetooth Chappals': How Some Tried To Cheat In Top Rajasthan Exam