Uttar Pradesh Chief Minister Yogi Adityanath said it is not only a historic but also an emotional moment as after 500 years the Ram temple work will start. 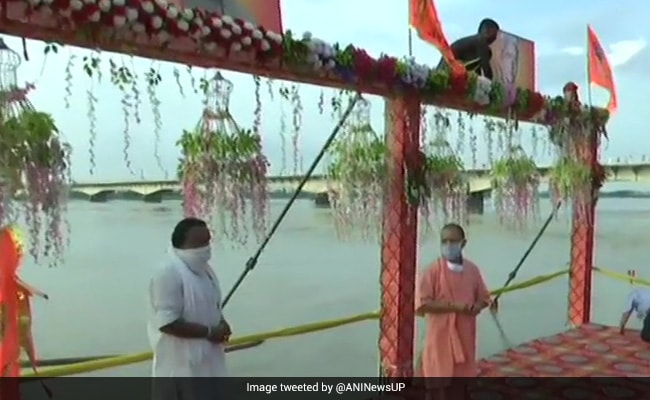 The chief minister was in Ayodhya to oversee preparations for the August 5 event.

Uttar Pradesh Chief Minister Yogi Adityanath has said that the COVID-19 protocol will be strictly followed during the "bhoomi pujan" ceremony for Ram temple in Ayodhya and only those invited should come.

The chief minister, who was in the city to oversee preparations for the August 5 event, said it was a "historic and emotional" moment which will lay the "foundation of a new India."

He also hit out at the Congress, saying those who are making negative comments on the event had tried to create obstacles in the construction of the Ram temple and the people of the country know about them.

"It is not only a historic but also an emotional moment as after 500 years the Ram temple work will start. It will be the foundation of a new India. COVID-19 protocol will be strictly followed at the event. As the prime minister will be here representing 135 crore people, I appeal that only those who have been invited should visit Ayodhya. The rest should remain at their respective places," Mr Adityanath said, adding no laxity will be allowed.

Nearly 200 people have been invited for the ceremony, according to the temple trust.

The chief minister urged the people to light earthen lamps, decorate temples and recite Ramayana in memory of those who died "in the temple struggle."

For those who are keen to visit Ayodhya, arrangements will be made to bring people from every district once the coronavirus pandemic is over, he said.

The chief minister reached Ayodhya in the afternoon and visited the Ram Janmabhoomi site where the bhoomi pujan is to be held.

He also paid obeisance to Ramlalla (the idol of Lord Ram as an infant), visited Hanuman Garhi temple and gave directions to senior officers from the dais, where the main event is scheduled to be held.

The chief minister was scheduled to visit Ayodhya on Sunday but it was cancelled due to the death of state minister Kamla Rani Varun, who had contracted COVID-19.

Family Of Soldier, Killed 18 Years Ago, Wants To Return His Gallantry Award