UP Man, Waiting For Ambulance With Oxygen Cylinder, Sparks Criticism

On March 11, two doctors of a government hospital were suspended after a patient's severed leg was used as a pillow to prop up his head. 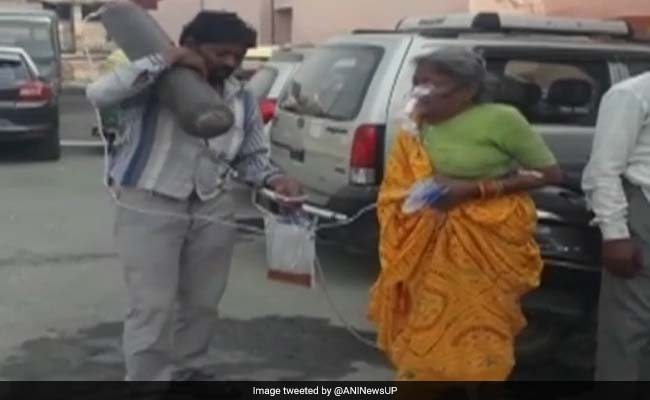 Runakta (Uttar Pradesh): A man is seen carrying an oxygen cylinder attached to his ailing mother, on his shoulder, in pictures that have gone viral on social media.

The picture taken outside the Uttar Pradesh's Agra Medical College shows the man standing helplessly as he holds the oxygen cylinder and urine collection bag attached to his mother as he awaits for an ambulance. His mother with oxygen mask on her face is seen standing next to him.

Despite their sorry state, the mother-son were not provided with an ambulance.

The images triggered an outcry.

India is yet a century behind in medical systems, buildings do not make facilities,infrastructure does

He should feel lucky ,he got a Oxygen cylinder. If he was in Gorakhpur he wouldn't be that lucky

Responding to questions, a hospital staff was quoted by news agency ANI, saying, "During patients' shifting ward boy asked him to wait for a while, that is when media took photos. We will inquire about the issue and will act if lapses are found."

Incidents of medical apathy have been reported across Uttar Pradesh. On March 11, two doctors of a government hospital were suspended after a patient's severed leg was used as a pillow to prop up his head. The stomach-churning scene was caught on mobile phone at a large government hospital in Jhansi.

Promoted
Listen to the latest songs, only on JioSaavn.com
In August 2017, over 70 children - mostly newborns - died at biggest government hospital in Gorakhpur, due to shortage of oxygen supply. A probe committee formed by Chief Minister Yogi Adityanath has submitted its report. The findings of the report are not yet known but the UP government has said, those found guilty in the probe will face action.