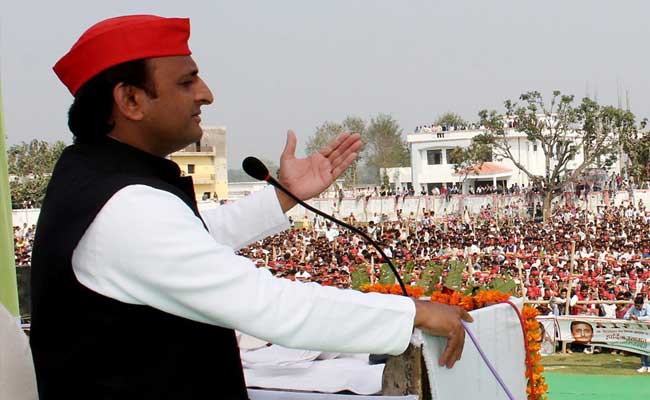 Ghazipur (Uttar Pradesh): Uttar Pradesh Chief Minister Akhilesh Yadav today alleged that the Kanpur train accident, which claimed 150 lives, occurred as a result of "damaged tracks" and ruled out the role of Pakistan's Intelligence agency ISI, as suspected by Indian Intelligence agencies. Alleging that the BJP leaders were used to seeking votes by "misguiding" people, Mr Yadav said, "Our railway minister could not take care of the tracks in Kanpur and gave a false report to the Prime Minister that the ISI had damaged the tracks. I want to say that since the incident occurred in Uttar Pradesh, at least I should have been informed about it...But, no information...no truth in it," he said at an election rally in UP's Ghazipur.

Ghazipur is the Lok Sabha constituency of Union Minister of State for Railways Manoj Sinha.

Over 150 people were killed in train accidents in Kanpur on November 20, and on December 28 last year. It was said that Pakistan's ISI was responsible for the incidents.

In a veiled reference to the ongoing campus row in Delhi University involving the BJP's students wing ABVP, Mr Yadav said, "I want to ask those patriotic people of the BJP, who are displaying their nationalism in Delhi, what have they done for the soldiers who laid down their lives for the country. What help was extended to their families."

"Only the SP government helps the families of soldiers who laid down their lives," he added.

The Samajwadi Party chief claimed that his party has already secured a lead in the first five phases of the seven-phase Uttar Pradesh Assembly election due to the works of its government and added that the "demoralised faces of the BJP and BSP leaders" said it all.

Promoted
Listen to the latest songs, only on JioSaavn.com
The sixth phase of the polls will be held tomorrow and the seventh and final phase on March 8. Results will be declared on March 11.