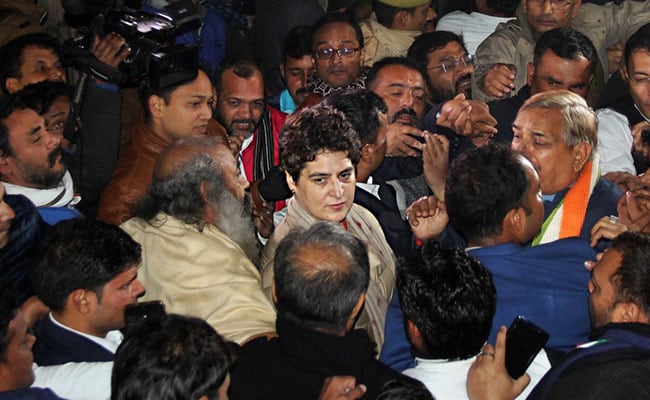 Uttar Pradesh Deputy Chief Minister Keshav Prasad Maurya hit out at Congress's Priyanka Gandhi Vadra a day after the alleged police action on her, and said "nautanki" (theatrics) will not fetch her party votes. The Congress leader alleged on Saturday that she had been manhandled and "grabbed by the throat" by policewomen as they tried to stop her from visiting the home of a retired police officer who was arrested after protesting against the new citizenship law.

Calling the Congress a "danga karao party" (rioting party), the Deputy Chief Minister alleged the party cannot tolerate the peaceful atmosphere and development in UP.

The BJP leader also called the Yogi Adityanath-led state a "symbol of Hindu-Muslim unity", adding that Congress and the Samajwadi Party were scared seeing their political futures in the dark.

Adding that Congress leaders are just interested in getting photographed, Mr Maurya said the party has become a "villain in the eyes of the public" by misleading the nation on the Citizenship (Amendment) Act.

"Everyone in UP knows that the Congress only has members who are interested in getting their photos clicked. By misleading the country on the issue of CAA, the Congress has become a villain in the eyes of the public" he tweeted in Hindi.

A high-voltage drama unfolded in Lucknow on Saturday evening after Priyanka Gandhi Vadra went to visit 76-year-old SR Darapuri. The police had initially stopped her vehicle; she then hitched a ride on a scooter and when stopped again, walked to her destination.

Videos show Priyanka Gandhi being stopped by policewomen as she was walking, surrounded by supporters and security. A brief scuffle followed, Ms Gandhi then walked off.

"They grabbed me by the neck and manhandled me. They then surrounded me while I was going on a party worker's two-wheeler, after which I walked to reach there," news agency ANI quoted Priyanka Gandhi as saying.

She told news agency PTI that another woman officer even pushed her to the ground in course of the scuffle. Archana Singh, the policewoman in question, denied any manhandling, the UP police said.

Mr Darapuri, a cancer patient, was taken into custody from his Lucknow residence on charges of rioting earlier this week. Uttar Pradesh police officers confirmed on Thursday that as many as 1,113 people have been arrested from places across the state in connection with the agitation.

Twenty one people have died in Uttar Pradesh alone during protests against the Citizenship law which for the first time makes religion the test of citizenship in India. The government says it will help minorities from three Muslim-dominated countries to get citizenship if they fled to India because of religious persecution. Critics say it is designed to discriminate against Muslims and violates the secular principles of the constitution.