UP Announces Compensation, Job To Family Of Jawan Killed In J&K Encounter

Sepoy Prashant Sharma was a resident of Khanjapur village in Muzaffarnagar district in the state. 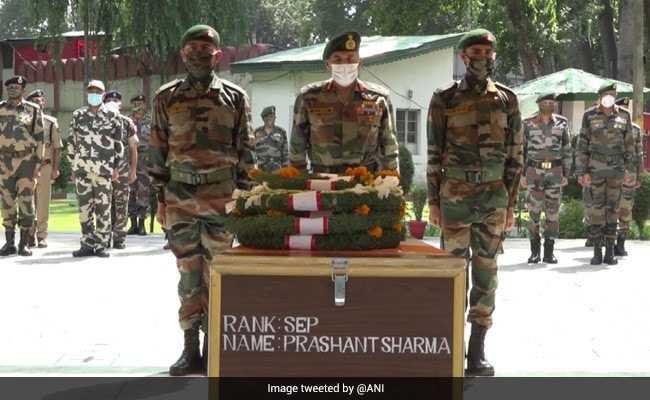 UP government has also decided to name a road in Muzaffarnagar after sepoy Prashant Sharma name.

Uttar Pradesh government on Saturday announced Rs 50 lakh compensation and a government job to the family of sepoy Prashant Sharma, who lost his life in an encounter in Jammu and Kashmir's Pulwama on Saturday, the chief minister's office said.

Sepoy Prashant Sharma was a resident of Khanjapur village in Muzaffarnagar district in the state.

The state government has also decided to name a road in Muzaffarnagar after his name.

The soldier was "in the lead element" of his party when it came into contact with terrorists during a specific search operation launched in Zadoora village in Pulwama district.

In the ensuing firefight, three terrorists were eliminated and Sepoy Prashant Sharma suffered multiple gunshot wounds on his chest.

Despite being grievously injured, he continued to fight. He was subsequently evacuated to 92 Base Hospital, Srinagar where he eventually succumbed to his injuries.

The 23-year-old soldier had joined the 26 Mechanised Infantry Battalion of the Army in 2016. He was serving with 50 Rashtriya Rifles Battalion.

He belonged to Khanjapur village of Muzaffarnagar district in Uttar Pradesh and is survived by his parents.