Health Minister's Plasma Therapy Alert Despite Use In Maharashtra, Delhi

Union Health Minister Dr Harsh Vardhan has cautioned against "routine use" of plasma therapy and anti-viral drug Remdesivir to treat COVID-19 patients, stating the investigational therapies should be adopted "rationally". 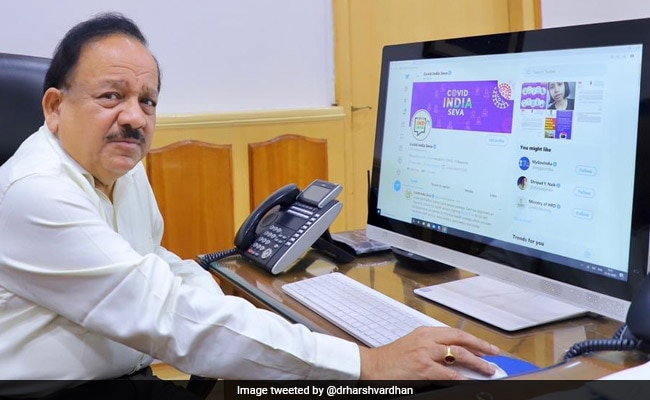 Health Minister Dr Harsh Vardhan said hospitals are being told to not use Remdesivir and CPT routinely.

Union Health Minister Dr Harsh Vardhan on Sunday cautioned against "routine use" of plasma therapy and anti-viral drug Remdesivir to treat COVID-19 patients, stating that these are "investigational therapies" and should be adopted "rationally".

Anti-viral drug Remdesivir and Convalescent Plasma Therapy (CPT) are being used widely, besides other drugs, to treat critically ill Covid patients in many states, including Maharashtra and Delhi - among the hardest hit by the pandemic that has infected more than 60 lakh people in the country. Their use is said to have increased especially after CPT was administered to two Delhi government ministers.

"Regarding the wide usage of investigational therapies such as Remdesivir and plasma therapy, the Union Health Minister has stated that the central government has issued regular advisories regarding their rational usage. Private hospitals have also been advised against routine use of these investigational therapies. The doctors in the States and Union Territories are being made aware of this through webinars and during the tele-consultation session of AIIMS-New Delhi," the Health Ministry statement read.

Two ministers in the Delhi government who tested positive for coronavirus - Health Minister Satyender Jain and Deputy Chief Minister Manish Sisodia - were given plasma therapy at a private hospital in Delhi when their condition deteriorated.

Mr Jain, who recovered from COVID-19 in June, had vouched for CPT's efficacy a day after a study by India's top medical research body ICMR stated that giving plasma had negligible effect on reducing death risk.

"More than 1,000 Covid patients have been given plasma in Delhi and most of them benefitted; their lives were saved. I know, I have recovered," Mr Jain told NDTV, defending its use as a 100-year-old line of treatment with "no adverse effects".

Doctors and experts have maintained that plasma therapy is beneficial if administered at the right stage of the coronavirus disease's progression, but have cautioned against use of Remdesivir for patients with kidney and liver problems.

Coronavirus treatment remains symptom based in the absence of a vaccine.