Nitish Kumar was sworn in as the Chief Minister of Bihar for the eighth time at the Patna Raj Bhavan. 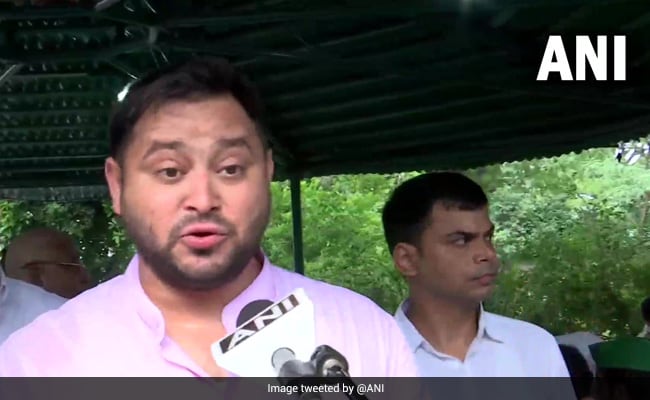 Tejashwi Yadav also took oath as the Deputy Chief Minister of the state.

After the Bihar Chief Minister and Deputy Chief Minister were sworn-in amid the political turbulence, new Deputy CM Tejashwi Yadav on Wednesday, assured that the new government will address unemployment and poverty on priority.

Speaking to mediapersons, Mr Yadav stressed that the Chief Minister felt the pain of the poor.

"Bihar did what the country needs to do. We have shown them a way. Our fight has been against unemployment. Our CM felt the pain of the poor and the youth. We will give bumper jobs within one month to poor and youth, it'll be something so grand that it has never happened before," Tejashwi Yadav told ANI.

He also highlighted his confidence in the Mahagathbandhan and said that the Bharatiya Janata Party (BJP) would be cornered as the opposition in Vidhan Sabha.

"Mahagathbandhan is so strong that BJP would be only one left for opposition in Vidhan Sabha... The difficult decision taken by CM Nitish Kumar is a decision which was needed. Communal tensions were being spread by BJP, they were trying to kill regional parties," he added.

Earlier, Nitish Kumar was sworn in as the Chief Minister of Bihar for the eighth time at the Patna Raj Bhavan.

This came a day after major political turmoil in the state, after which Nitish Kumar broke the alliance of Janata Dal-United (JD-U) with the Bharatiya Janata Party (BJP) and announced to form a new "Grand Alliance" which includes Tejashwi Yadav's Rashtriya Janata Dal (RJD) and other Opposition parties.

The oath ceremony was attended by Tejashwi and his wife Rajshri, former CM Rabri Devi and RJD leader Tej Pratap Yadav at the swearing-in ceremony at Raj Bhavan in Patna.

Tejashwi Yadav also took oath as the Deputy Chief Minister of the state.

Nitish said there are seven parties including 164 MLAs along with an independent MLA in the Mahagathbandhan, at a joint presser with RJD's Tejashwi Yadav after meeting Bihar Governor Phagu Chauhan on Tuesday.