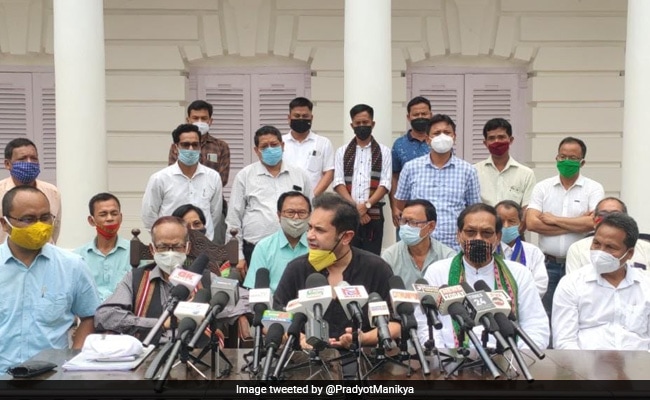 The alliance of tribal parties recently swept the tribal council polls in Tripura.

The Indigenous Nationalist Party of Twipra on Thursday officially merged with the Tipraha Indigenous Progressive Regional Alliance (TIPRA), further consolidating the tribal alliance in Tripura that could put up a formidable challenge to the ruling BJP in the 2023 Assembly polls.

The TIPRA, led by Pradyot Kishore Deb Barman, is working to forge an alliance of tribal parties.

Recently, the alliance of TIPRA, INPT, Tipraland State Party and IPFT Tipraha swept the tribal council polls in the state. The alliance emerged victorious in 18 out of the 28 seats that went to polls while the BJP-IPFT combine, which has been in power in the state since 2018, managed to win just 9 seats. An Independent candidate won in the remaining one seat.

The results assumed significance as regional tribal parties in the northeast have mostly aligned with the BJP over the past few years, while in this case, they came together to defeat it.

The coming together of tribal parties is also crucial because 20 out of the 60 seats in Tripura Assembly are reserved for tribal candidates and hold the key to power in the state.

Speaking to reporters, Mr Barman said, "We have been talking for the last few months and our call was for Thansa (unity). Many times, political parties make alliances only before elections, but once the polls are over, nobody talks about community or unity."

Mr Barman expressed happiness that the INPT has taken a decision on behalf of the entire community to strengthen the party. "It is a very significant step. Six months back, there were seven to eight regional parties. Now, only one or two parties are left. This is historic as the oldest political party in Tripura has decided in the interest of our combined goal of 'Greater Tipraland' to come together and work as a single entity," he said.

"This is for the first time when the alliance partners have decided to merge because we are immensely committed to become one and fight for the same cause," Mr Barman further said.

INPT president Hrangkhawl said they decided on the merger following detailed discussions with Mr Barman. He also said some leaders may not be very happy with the development, but most are. "We are happy that we won the ADC (Tripura Tribal Areas Autonomous District Council) polls under the leadership of our chairman," Mr Hrangkhawl said.