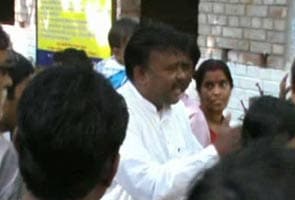 Kolkata: After just 18 months of coming to power, the Trinamool Congress seems to be in trouble in West Bengal. The state's new Minister of State for Agriculture Becharam Manna faced angry protests from farmers who had supported the anti-Tata movement but who are now tiring of waiting for government sops and the return of their land.

"We want money for the land taken away from us for the Nano car factory. We have waited for one and a half years (since TMC came to power in the state) to get the compensation, but we don't even hear about it anymore. We are now left begging," was the complaint of the people to Mr Manna, a Trinamool Congress MLA from Haripal in the district who was closely associated with the Singur agitation.

The Trinamool Congress, led by Mamata Banerjee, had launched a campaign in 2007 in Singur against the Left Front's acquisition of farm land for setting up a car manufacturing plant by Tata Motors for a factory to produce India's cheapest car, the Nano. Mr Manna was one of the faces of the movement,  which had played a key role in the Trinamool Congress' victory in last year's assembly elections and catapulted Ms Banerjee to the chief minister's chair.

The people of Gopalnagar, Beraberi and Khasherberi villages, land from which were included in the project site, had gathered in front of the office of the Block Development Officer (BDO) for collecting rice coupons given by the state government. These people had neither signed nor taken any compensation for their holdings from the erstwhile Left Front government.

Mr Manna, who was there to oversee the distribution of the coupons, told the people that the state government was serious about its commitment to those who lost their lands during the Singur agitation. "This was reflected in the first Cabinet decision on land rehabilitation scheme for the affected after TMC came to power," he claimed.

"Chief Minister Mamata Banerjee has not forgotten your plight. She will be here on Friday... I am certain that everything will be set right one day," Mr Manna promised.

The state government had passed the Singur Land Rehabilitation and Development Act, 2011 but it was nullified by a division bench of the Calcutta High Court following which the state appealed before the Supreme Court, where the matter is pending.

The Trinamool government had passed the legislation at Banerjee's initiative providing for 400 acres to unwilling farmers who had to give up their holding for the small car project. The unwilling farmers had not even accepted compensation for their land at Singur.

Mr Manna is also facing public anger for criticising Singur MLA Rabindranath Bhattacharya who had recently said that many Trinamool Congress workers were extorting money from people and Chief Minister Mamata Banerjee was aware of it.

"He is a respected and honest leader but his allegations are wrong. If he felt that some partymen are involved in extorting money, he should have informed the leadership," Mr Manna had said on Tuesday.

Mr Bhattacharya, who had earlier been the state's Agriculture Minister, was shunted out to the low-key statistics and programme implementation department a few days ago. Mr Manna, a peasant leader, was recently made the Minister of State for Agriculture.