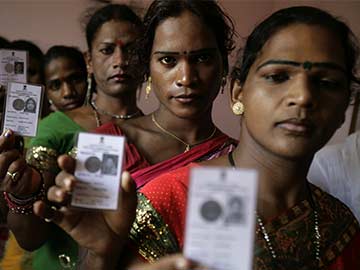 New Delhi: The Supreme Court today acknowledged a third gender that is neither male nor female in a landmark judgement that asks the government to make sure that transgenders get job quotas and facilities including a voter card, passport and driving licence.

"Recognition of transgenders as a third gender is not a social or medical issue but a human rights issue," the court said today, asking the Centre to treat transgenders as "socially and economically backward", to enable them to get reservations in jobs and education.

"Transgenders are also citizens of India. It is the right of every human being to choose their gender. The spirit of the Constitution is to provide equal opportunity to every citizens to grow and attain their potential, irrespective of caste, religion or gender," the court said.

The case was filed in 2012 by a group of petitioners including prominent eunuch and activist Laxmi Narayan Tripathi seeking equal rights for the transgender population under the law.

The court expressed concern at the discrimination and said the Centre and states must work to raise awareness and end any perceived stigma. This ruling comes four months after the same court reinstated a colonial-era ban on gay sex, in a widely criticised decision.

Gay sex had been effectively legalised in 2009 when the Delhi High Court ruled that a section of the penal code prohibiting "carnal intercourse against the order of nature" was an infringement of fundamental rights.

Promoted
Listen to the latest songs, only on JioSaavn.com
Former Election Commission SY Quraishi said, "When the Election Commission recognised transgender as the 'other' gender besides male and female, one million of them got empowered. The Supreme Court has endorsed it."

The Election Commission had issued voters' cards for the first time to transgenders last year.