Train operations in Punjab were severely affected for almost two months after farmers, protesting against the three new farm laws, sat on railway tracks and on station premises, refusing to let trains run. 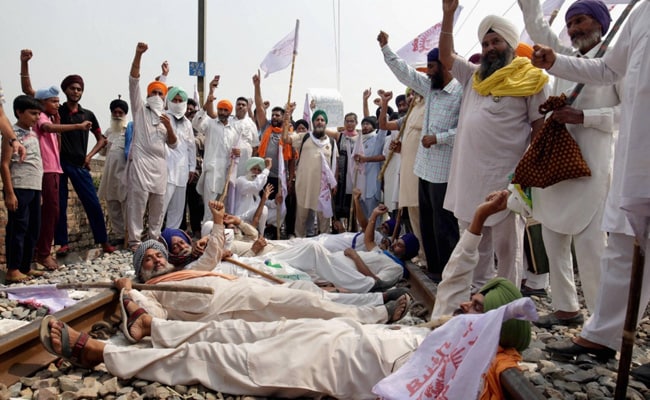 Train services in Punjab, which were suspended for almost two months due to the farmers' agitation against the three new farm laws, have normalised except for a 32-km stretch, Chairman Railway Board VK Yadav said Tuesday.

Train operations in Punjab were severely affected for almost two months after farmers, protesting against the three new farm laws, sat on railway tracks and on station premises, refusing to let trains run.

"We have had no issues in running trains in Punjab since November 23 except between Beas and Amritsar where some protestors are still present. But an alternative route is available and trains to Amritsar are being diverted through that. However, we had to cancel some trains on that route as the earlier route was double line while the diverted route is  a single line," Mr Yadav said at a press conference.

He also said between November 23 and November 30, 94 passenger trains have entered Punjab while 78 have exited the state.

Pushing the state into full gear as far as commodities are concerned, during this period out of the 384 loaded freight trains that entered, 155 carried coal, 58 carried fertilizers, 25 carried steel, 32 carried petroleum, oil and lubricants among others, he said.

Of the 373 loaded trains that exited Punjab, 245 trains carried foodgrains to other parts of the country.

The Railways had earlier said the suspension of services have led to losses to the tune of Rs 2,220 crore.

The government on Tuesday expressed confidence that it will reach a solution after discussing the issues raised by the protesting farmers, as a meeting between union ministers and representatives of over 30 farmers' organisations was underway.

For the meeting at Vigyan Bhawan in Delhi, Union Agriculture Minister Narendra Singh Tomar was accompanied by Railways and Commerce and Industry Minister Piyush Goyal and Minister of State for Commerce Som Parkash, also an MP from Punjab.