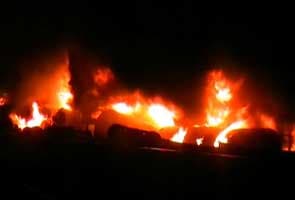 Lucknow: A massive fire has broken out on a train carrying fuel wagons near Jarwal station in Uttar Pradesh's Bahraich district. No injuries or casualties have been reported so far.

10 out of the 47 wagons have been completely engulfed in fire, according to the Railways.

The Lucknow-Howrah rail route has been affected because of the incident; seven trains have been diverted and two others have been cancelled.

The wagons were loaded with petroleum products when the fire broke out. The cause of the fire is not known yet.

Promoted
Listen to the latest songs, only on JioSaavn.com
Nearly half a doze fire engines are at the spot trying the douse the fire.