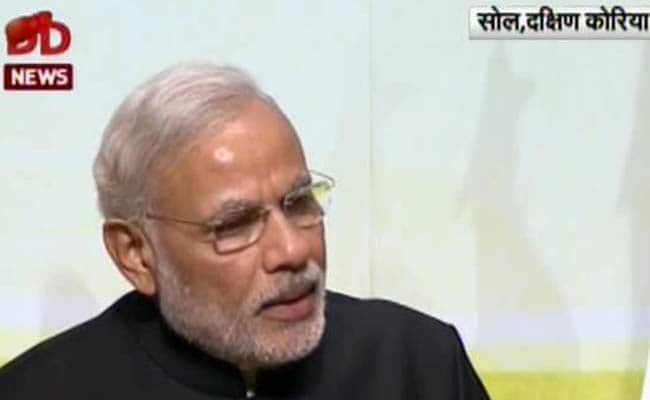 Seoul: Addressing a gathering of Indians in South Korea, Prime Minister Narendra Modi today said that in his one year in power, the world's perception of India had changed and people had become excited about returning to their country.

"Earlier citizens of India used to regret being born here. They all wanted to leave the country for better opportunities. Now they are ready to return even if they earn less in India than abroad," PM Modi said at a reception organized by the Indian community in Seoul.

PM Modi said he was offering one miracle antidote for India's problems. "That booti (medicinal herb) is development," he said, adding, "Development is not just about constructing big buildings or good roads. I want to improve the quality of life."

He called it "shameful" that a large number of women who had no toilets at home had to go out in the open.

Without mentioning the previous Congress-led government, PM Modi spoke about changing the global perception of India.

Promoted
Listen to the latest songs, only on JioSaavn.com
"When I became the prime minister, what was surprising was that news was not focused on my work but that people have started coming to work on time. It was painful for me to read all that," he said.

This is the prime minister's last public meeting in a three nation tour that began in China on Friday.