The Obamas charm with their fisherfolk dance 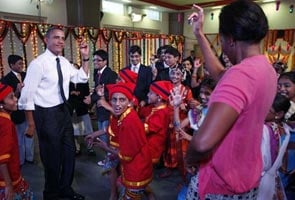 Mumbai: US first couple Barack and Michelle Obama hit the dance floor to a foot-tapping Marathi folk number, joining a group of students at the Holy Name school to participate in symbolic Diwali festivities.

The US President and the First Lady's engagement for the day started at the Holy Name High School in upmarket Colaba locality in south Mumbai where a group of students entertained them with a cultural extravaganza.

The Obamas, who lit a lamp to mark the celebrations, were greeted by the students in traditional Indian attire as they interacted with the children, shaking hands and posing for pictures. The students were seen gleefully clicking the couple's photos using cellphone cameras.

The cheering and clapping Obamas seemed so charmed by the tune and the performance of the children during the 'Koli' dance -- which gives expression to the culture and identity of
Maharashtrian fisherfolk -- that they joined the students and danced with them.

Salman Khurshid, Minister of State for Corporate Affairs and Minister-in-Waiting for Obama was seen explaining the significance of performances to the US President.

Promoted
Listen to the latest songs, only on JioSaavn.com
Wearing a white shirt and dark trousers, 49-year-old Obama rolled up his sleeves and willingly posed for photographs.

Even teachers sought his autograph while Michelle, 46, dressed in a pink top and a check skirt, mingled with the teaching staff.

Michelle appeared to be a quick learner as she matched the 'Koli' dance steps with the children with great elan.

Obama took a little time to adjust himself to the steps but it did not take away the charm of the gesture.

The hall where the programme took place was decked up with fresh flowers and banters made of leaves.

One of the student performers later said Obama liked  their dance and described it as " graceful, nice and beautiful".

"Mr Obama liked our dance very much. He danced with us, he also did the Koli dance and diya dance," the student said.