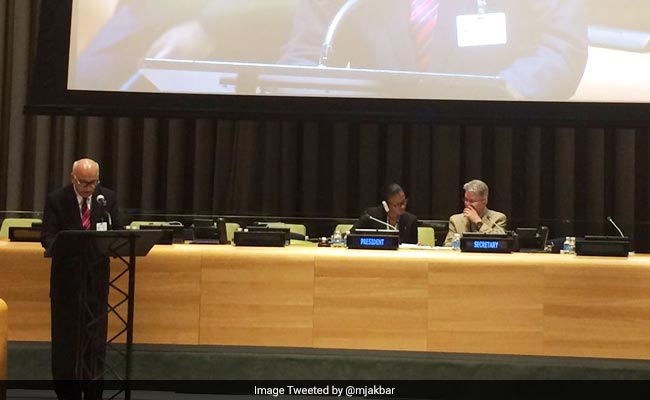 United Nations: Underlining that the world cannot have prosperity without peace, India has told the UN member states that terrorism is the principal threat to peace and the poor are its most vulnerable victims.

"We cannot have prosperity without peace, and the principal threat to peace now is terrorism. The poor are the most vulnerable victims of terrorism, not least because conflict leads to devastation," Minister of State for External Affairs MJ Akbar said yesterday.

Speaking at a high-level segment on Right to Development, he said the challenge of the 21st century is to seek peace in all its dimensions and there is no peace greater than peace of mind. "Food, shelter and an economic future are fundamental human rights. They must become the new normal in every corner of the globe," he said.

Mr Akbar stressed that the developed world must help make global governance more democratic and equitable while nation states do all within their powers to bring education, healthcare, sanitation, housing, employment to their peoples, the international community, especially.

Noting that while there has been a decline in the number of people living in extreme poverty, the pace of aspiration has also quickened in the 21st century and the hundreds of millions still trapped in dire poverty do not merely want progress but development also.

"They cannot eat statistics. Piety on paper is not much help to a child in desperate need of medicine in a village hundred miles outside the zone of medical care. The poor will not wait. Why should they? They are asking questions," he said.

He said while poverty has decreased by 3 per cent in the last few years the world's wealth has risen by a multiple of that. The richest 1 per cent of the world's population now owns 50 per cent of its total wealth. "While the poor have a little more bread; the rich have acquired castles," he added.

Stressing that the Right to Development is a noble and necessary objective, Mr Akbar said the people's right is a government's duty to ensure that the first and largest share of development must go to those who need it most.

"A world with islands of prosperity amidst a sea of want is not only morally untenable, it is also politically unsustainable. Development is the only guarantee of stability. Education is the cornerstone of development: we must maximize investment in the child, expand knowledge to fight superstition, prejudice and ignorance," he said.

He further noted that rapid globalization in the last two decades has brought forth a series of common global challenges such as accelerating climate change, pandemics, large refugee movements, financial crises, inter-linked markets, commodity prices among others.