The Chief Minister-who once indicated that responding to political adversaries is giving them legitimacy -- has maintained his habitual silence on Tejashwi Yadav's attacks. 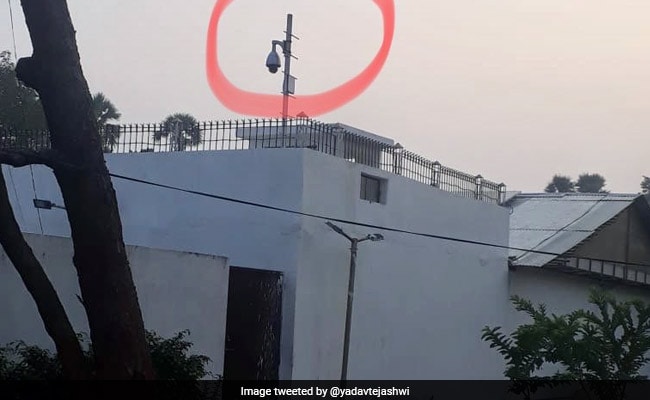 The 5 Circular Road bungalow was allotted to Tejashwi Yadav when he was the Deputy Chief Minister.

Bihar opposition leader Tejashwi Yadav is upset with his neighbor, whom he has accused of spying and taken to task through a series of furious tweets. The neighbor is Chief Minister Nitish Kumar. Mr Yadav claims the Chief Minister has trained the one of the CCTV cameras in his bungalow across the wall and towards the home of his former deputy. He even attached a photo and a video of the offending camera.

The 5 Circular Road bungalow was allotted to Tejashwi Yadav when he was the Deputy Chief Minister.

When Nitish Kumar broke the Grand Alliance and Mr Yadav ended up as the leader of the opposition, he was asked to vacate it. But in view of its favourable position - the Chief Minister's house on one side and his parents' home across the road, the young leader petitioned the Chief Minister to retain it.

But the relation between the two leaders has gone further downhill since.

Over the last months, Mr Yadav had targeted the Chief Minister repeatedly, criticizing him over multiple issues, including law and order, corruption and  farmers' woes.

Is this Nitish Ji's paranoia for security or many other insecurities, frustrations & apprehensions with tht he has put only CCTV camera right on the boundary wall b/w his & mine residence to snoop over?

Why CM needs a camera only thr with already a permanent security check post? pic.twitter.com/EljUO5EiLf

"Bihar CM's residence is surrounded by main roads from 3 sides & Leader of Opposition's residence from the fourth side. But CM felt the need for CCTV only on the wall bordering his political adversary's residence? Someone should tell him that these petty tricks will prove futile!" another tweet read.

The Patna region, Mr Yadav said, is witnessing "a heinous crime" every passing second. But the Chief Minister, he said, "is more bothered about snooping into day to day activities of the Opponents & infringing their privacy rather than the security of the citizens!"

In a harsh takedown, Tejashwi Yadav not only accused the Chief Minister of snooping on political adversaries, but also indicated that his commitment to austerity is also fake.

"Nitish Kumar has occupied 3 Chief Ministerial Bungalows (2 in Patna, 1 in Delhi) moreover One exclusive plush suite in Bihar Bhawan! Why self proclaimed austere CM of a poor State has this obsession with luxury & grandeur? Has he got any morality to answer this?"

The Chief Minister-who once indicated that responding to political adversaries is giving them legitimacy -- has maintained his habitual silence on Tejashwi Yadav's attacks.  There has been no response from his government either.