Last week Mr Singh underlined the government's goal of making India a leader in the defence sector, "from design to production and export" 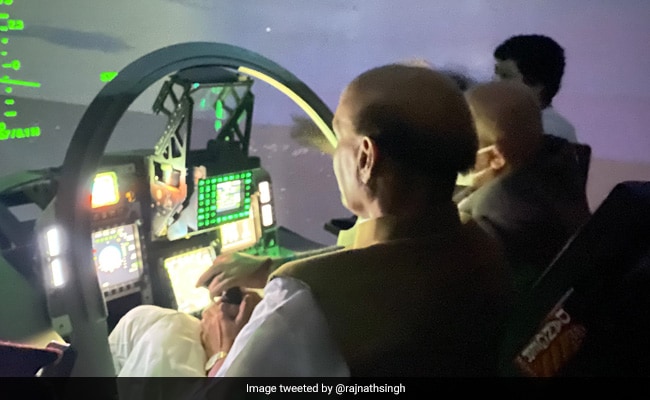 In February the government confirmed a Rs 45,696 crore deal to buy 83 Tejas LCA

Defence Minister Rajnath Singh tweeted Friday morning to say he had an "amazing experience 'flying'" the Tejas LCA (Light Combat Aircraft) on a simulator at the Aeronautical Development Establishment in Bengaluru.

He posted a photo of himself sitting in the simulator's cockpit - which was lit up with the Tejas' HUD, or heads-up display, showing flight altitude and other data.

A trained pilot was sitting next to him and holding the controls.

"Had an amazing experience of flying in (the) LCA Tejas Simulator at the Aeronautical Development Establishment (ADE) facility in Bengaluru," the Defence Minister wrote.

The Aeronautical Development Establishment, or ADE, conceptualises and develops of state-of-the-art UAVs, or Unmanned Aerial Vehicles, and flight systems for the country's armed forces. Its primary R&D is in the fields of UAVs, pilotless target aircraft, aerial weapons, and flight sims and control systems.

The Defence Minister is visiting ADE to address the inaugural session of the Air Force's National Conclave at the Yelahanka Air Base in Bengaluru.

Last week Mr Singh underlined the government's goal of making India a leader in the defence sector, "from design to production and export, with the active participation of public and private sectors".

He made the remark while launching seven new PSUs that will operate in this sector, and have already been given 66 contracts worth Rs 65,000 crore from the armed forces.

In February the government also confirmed a Rs 45,696 crore deal to buy 73 Tejas LCA and 10 trainer aircraft from Bengaluru's Hindustan Aeronautics Limited. These would become "a potent platform to meet the operational requirements of the Indian Air Force", the government said.

The Tejas Mk-1A LCA is an indigenously designed and manufactured fourth-generation fighter with critical operational capabilities that include an Active Electronically Scanned Array (AESA) radar, an Electronic Warfare (EW) suite, and is capable of air-to-air refueling (AAR).

It also has Beyond Visual Range Missile capabilities and Air-to-Ground weapons.