"Technical Reasons": Jignesh Mevani On Why He Could Not Join Congress

Jignesh Mevani said he is an independent MLA and if he joins a party, he may not continue as an MLA. 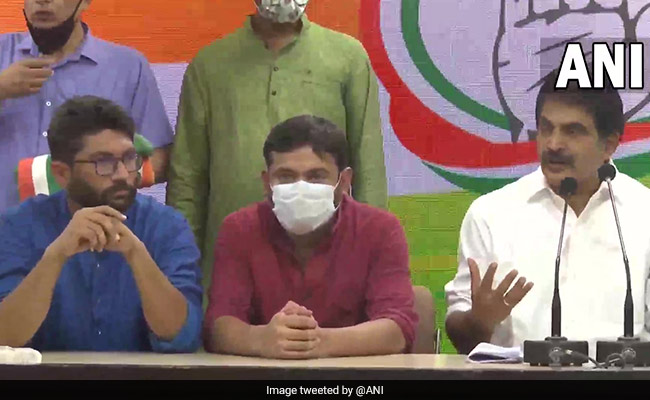 Gujarat MLA Jignesh Mevani on Tuesday clarified that he could not join the Congress due to some "technical" reasons.

Giving clarification further in a press conference at AICC headquarters in Delhi, Mr Mevani said he is an independent MLA and if he joins a party, he may not continue as an MLA.

However, extending his support to Congress, Mr Mevani said that ideologically he is with the party. He announced he shall contest the upcoming Gujarat Assembly polls from Congress.

Addressing a joint press conference along with former CPI leader Kanhaiya Kumar who joined the Congress today, Mewani said, "I could not join Congress formally due to technical reasons. I am an independent MLA, if I join a party, I may not continue as an MLA... I am part of the Congress ideologically, will fight the upcoming Gujarat polls from Congress symbol."

Mr Mevani had won from the reserved Vadgam Assembly seat in the 2017 Gujarat Assembly polls. Congress did not field its candidate against Mr Mevani in the Vadgam constituency.

He stated that he chose to be with the party because Congress led the Independence struggle and ousted the Britishers from the country.

"To save democracy and the idea of India, I have to be with a party that lead the Independence struggle and dragged the British out of the country. This is why I am here with the Congress today," he added.

Kanhaiya Kumar was a member of the Communist Party of India (CPI) national executive, a top decision-making body of the party.

He had also contested against Union Minister Giriraj Singh in Bihar's Begusarai Lok Sabha seat in the 2019 general elections. However, he lost the election.