The MLAs refused to attend a meeting with two central observers from Delhi, Ajay Maken and Mallikarjun Kharge, asserting that they will not accept Ashok Gehlot's rival Sachin Pilot as Rajasthan Chief Minister. 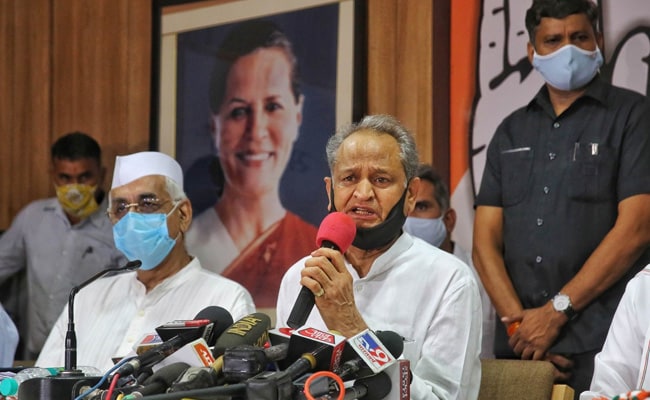 Ashok Gehlot, said to be the Gandhis' choice for Congress chief, denied any role in the rebellion.

A senior Rajasthan MLA close to Chief Minister Ashok Gehlot today "swore" that he is not involved in the protest on Sunday that saw 92 Congress MLAs threaten mass resignation.

The MLAs refused to attend a meeting with two central party leaders, Ajay Maken and Mallikarjun Kharge, declaring they will not accept Ashok Gehlot's rival Sachin Pilot as Rajasthan Chief Minister. Instead, the MLAs gathered at the home of Shanti Dhariwal, a minister close to Ashok Gehlot.

Mr Gehlot, who is believed to be the Gandhis' choice for Congress president, has denied any role in the rebellion and has even apologised to Mr Kharge, sources say. State minister Pratap Singh Kachariyawas backed him up.

"I swear that Ashok Gehlot didn't tell even one MLA (to protest)," Mr Kachariyawas told NDTV. He claimed the MLAs left last night for their hometowns not as a show of protest but because of the Navratri festival.

Like Mr Gehlot, Mr Kachariyawas cited a temple visit in the morning to bolster his claim.

"It was decided a day before that Gehlot ji would go to the Tanot Mata shrine in Jaisalmer near the India-Pakistan border. There is no phone reception there," the MLA said, suggesting that the Chief Minister was cut off for a few hours.

Mr Gehlot flew down to Jaisalmer in a special flight with Mr Kachariyawas and Govind Singh Dotasra.

"When we returned to Jaipur, Mr Gehlot said you go, meet Ajay Maken and Kharge and then come back to my place. Bring (state minister) Shanti Dhariwal," said the Congress leader.

All MLAs were to be at the meeting with central Congress leaders at 7 pm on Sunday at the Chief Minister's home.

But by the time Mr Gehlot returned from his shrine visit, Congress Chief Whip Mahesh Joshi, Mahendra Chaudhary and Shanti Dhariwal had invited the MLAs to a different venue - Mr Dhariwal's house.

The MLAs passed a resolution saying the leader replacing Ashok Gehlot cannot be one of those who backed Sachin Pilot's 2020 rebellion.

"The MLAs wondered how a Chief Minister could be chosen without everyone being consulted. The new Chief Minister should be picked from among 102 MLAs who stayed with Mr Gehlot during the 2020 revolt, not Sachin Pilot," Mr Kachariyawas said.

"Any decision in a democracy is based on numbers," he added. The country wants Rahul Gandhi's leadership with Mr Gehlot as Congress president, he remarked.

The MLAs gathered at the house of the Parliamentary Affairs minister, Mr Kachariyawas said, adding, "From there they were supposed to go the Chief Minister's house."

Mr Kachariyawas said he "didn't have a personal fight" with Mr Pilot. "But MLAs who were with us and supported us through that revolt, should you not listen to them," he asked.

KL Bairwa, one of the 20 MLAs in Mr Pilot's corner, scoffed at Team Gehlot denying any revolt.

"The system is that Mr Gehlot must quit. Ask anyone, we are ready to follow what our high command decides. There can be no betrayal, everything will be decided by the high command," said Mr Bairwa.

Questioning Mr Gehlot's claim that he had no control over the Congress' turmoil, he said, "Without him saying it, such thing cannot happen."