Hospitals treating COVID patients have been asked to ensure power backup and arrangements are being made to ensure uninterrupted generation of oxygen. 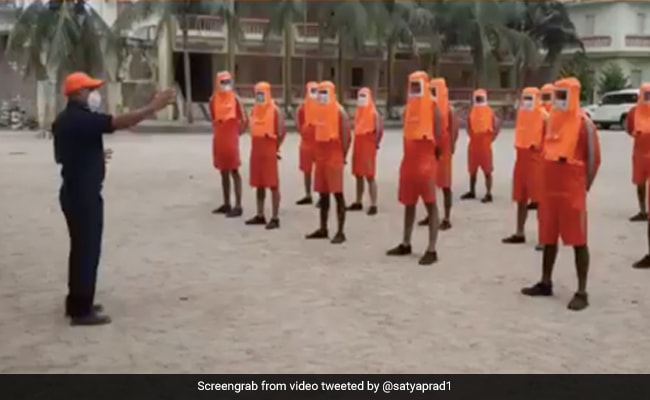 Several districts of Gujarat are likely to receive heavy to very heavy rains, the IMD has warned.

An estimated 1.5 lakh people are being shifted from low-lying coastal areas in Gujarat while 54 teams of the NDRF and SDRF remained deployed on Sunday in view of the IMD's warning that the very severe cyclonic storm Tauktae will reach the state coast on Monday evening and cross it on early Tuesday morning.

The government has asked hospitals treating COVID-19 patients to ensure a power backup and arrangements are also being made to ensure uninterrupted generation of medical oxygen in the eight manufacturing units and its supply.

Armed Forces are also kept on standby to deal with any eventuality.

"With the cyclone likely to affect power supply, hospitals treating COVID-19 patients have been asked to ensure power back-up. Arrangements have also been made to ensure uninterrupted generation of medical oxygen in the eight manufacturing units and buffer stock is also created," Chief Minister Vijay Rupani told reporters after attending a cyclone review meeting in Gandhinagar.

The government has also decided to halt the COVID-19 vaccination drive on Monday and Tuesday as the health staff will be kept on standby for the next two days to meet any emergency arising out of the cyclonic storm, he said.

"The state government has decided that there should be zero casualty due to the cyclone. We have got time at hand, so people residing in low-lying areas and coastal villages will be relocated by (Sunday) midnight. It is estimated that around 1.5 lakh people will be shifted," Rupani said.

He said as thatched houses will be affected the most in the cyclone, the government's priority is to shift all the people residing in such houses in the affected areas by Sunday midnight.

"If required, the armed forces will also assist in relief and rescue operations, and have been kept on standby," Rupani added.

He said that as the power supply is going to be disrupted, about 1,500 hospitals treating COVID-19 patients have been asked to make arrangements for power backup through generators to ensure that treatment is not affected.

The arrangement has also been made to ensure uninterrupted production and supply of oxygen to hospitals, and also to create a buffer stock, he said.

"We are concerned and have ensured through advanced planning that the (COVID-19) patients are not affected due to the disruption in power and oxygen supply," Rupani said.

In its latest bulletin, the India Meteorological Department said Tauktae is very likely to intensify further during the next 24 hours and reach the Gujarat coast on Monday evening. It will cross the state coast between Porbandar and Mahuva (in Bhavnagar district) around early Tuesday morning.

The Met department has warned of heavy to very heavy rains with isolated extremely heavy falls in several districts of Gujarat, especially those in Saurashtra and south Gujarat regions.

Some places in Ahmedabad are also likely to receive heavy to very heavy rainfall on Monday and Tuesday.

On Wednesday, isolated places in some districts in north Gujarat will also receive heavy to very heavy rainfall, as per the IMD.

Sea condition will become "very rough to high" along and off south Gujarat coast from Monday morning, and "very high to phenomenal" from Monday midnight, it added.