A vacation bench of Justice S C Gupte was hearing an appeal filed by the Goa government, challenging the May 21 judgement passed by sessions judge Kshama Joshi acquitting Tarun Tejpal in the case. 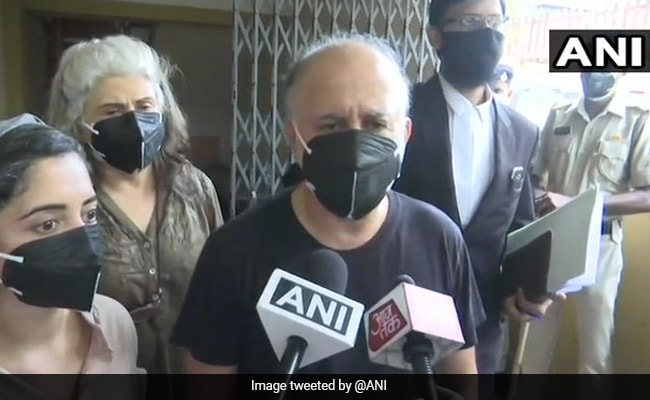 Tarun Tejpal was accused of sexually assaulting his then-colleague in the lift of a five-star hotel.

The Goa bench of the Bombay High Court on Thursday directed a sessions court, which recently acquitted journalist Tarun Tejpal in a 2013 rape case, to redact all references in its judgement that disclose the survivor's identity, before uploading it on the court's website.

A vacation bench of Justice S C Gupte was hearing an appeal filed by the Goa government, challenging the May 21 judgement passed by sessions judge Kshama Joshi acquitting Tarun Tejpal in the case.

Tarun Tejpal, former editor-in-chief of Tehelka, was accused of sexually assaulting his then-colleague in the lift of a five-star hotel in Goa in 2013 while they were attending an event.

The sessions court while acquitting Tarun Tejpal questioned the survivor's conduct, holding that she did not exhibit any kind of "normative behaviour" such as trauma and shock which a survivor of sexual assault might plausibly show.

Solicitor General of India Tushar Mehta, appearing for the Goa government, on Thursday told the High Court that the observations made in the judgement and most of the findings with regard to the survivor were "astonishing".

"The judgement, which is yet to be uploaded on the court's website and made public, also in various paragraphs discloses the identity of the victim woman. This is a criminal offence," he said.

The judgement discloses the names of the survivor's mother and husband and also the survivor's email ID which indirectly reveals her (survivor's) name, Tushar Mehta said.

Justice S C Gupte said he would take care of this and passed an order saying, "Considering the law against disclosure of the identity of victims in such offences, it is in the interest of justice to have these references redacted."

"The trial court is accordingly directed to redact the references made in the judgement that disclose the identity of the victim before uploading the judgement on the court's website," Justice Gupte said.

Tushar Mehta told the court it was sad that the High Court has to order this (redaction).

"The trial court ought to have been sensitive towards these issues," he said.

Criticising the observations and findings in the judgement, Tushar Mehta further mentioned that the sessions judge says a survivor of sexual offences should display trauma and only then her testimony can be believed.

"The system expects sensitivity apart from judicial jurisprudence while dealing with such matters. We owe it to the girls (victims)," Tushar Mehta said.

He also questioned references made in the judgement to the survivor's meeting with senior advocate Indira Jaisingh and other women lawyers to discuss the case before recording her statement with police.

"This girl, who is a victim of sexual abuse, had approached senior and reputed advocate Indira Jaisingh. The girl rightly took advice from a woman lawyer. What is wrong with that?" Tushar Mehta said.

He told the court that the government, considering the seriousness of the matter, filed its appeal even before it received a copy of the judgement.

"We received a copy of the judgement only on May 25. We would like to bring the judgement on record and also amend the grounds of challenge in the petition," Tushar Mehta said.

The court allowed the same and posted the appeal for further hearing on June 2.

Attempt Made To Remove Women From Public Life In Afghanistan: India At UN