The 'Swachhata Hi Seva' movement aims at generating greater public participation towards Swachhta (cleanliness) and is being organised in the run-up to the fourth anniversary of the Swachh Bharat Mission, on October 2. 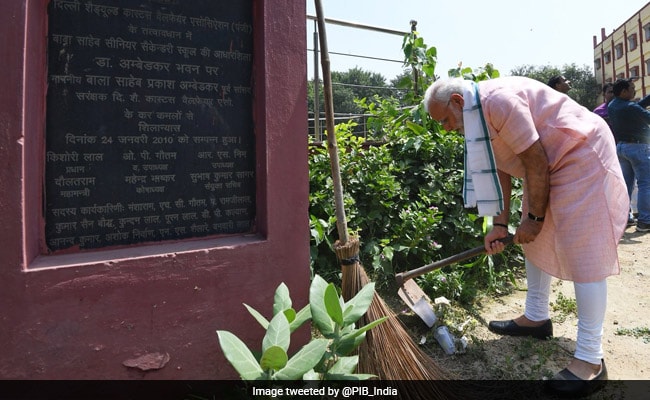 Prime Minister Narendra Modi today reached Baba Sahib Ambedkar Higher Secondary School in Delhi's Paharganj and picked up a broom to clean the surroundings. As part of his 'shram daan' or voluntary work, he cleaned the school surroundings.

Wearing a pale pink half-sleeve kurta, Prime Minister Modi was seen picking up pieces of paper and disposable plastic glasses with his hands. He also used a shovel to gather the garbage at one place.

After reaching the school, he first paid floral tributes at BR Ambedkar's statue in its premises.

He also interacted with some students, and explained to them, the importance of cleanliness.

The prime minister later tweeted, "With enthusiastic young friends at the Baba Sahib Ambedkar Secondary School in Delhi. It is India's youth that have led from the front and ushered in a positive change when it comes to cleanliness."

Earlier, he interacted with people via a video link to launch "Swachhata Hi Seva" movement, a fortnight-long event.

The 'Swachhata Hi Seva' movement aims at generating greater public participation towards Swachhta (cleanliness) and is being organised in the run-up to the fourth anniversary of the Swachh Bharat Mission, on October 2 2018, which will also mark the commencement of the 150th birth anniversary celebrations of Mahatma Gandhi.

The Prime Minister's Office said no special traffic arrangements were made for the movement of the prime minister and that he reached the venue in usual traffic conditions.

Baba Sahib Ambedkar School near Ambedkar Bhawan on Jhansi Rani Road, Paharganj, is a higher secondary school affiliated to the Central Board of Secondary Education.

The school has been operating under a trust named as Delhi Schedule Caste Welfare Association registered under Society Registration Act. The Society has been registered on  June 17, 1946.

The campus was bought by Dr BR Ambedkar himself in 1946 with an aim to advance the educational, social and economic well being of scheduled castes.