Rhea Chakraborty Said, "Whatever I Did, I Did For Sushant": Investigators

Rhea Chakraborty has been accused of involvement in the death of Sushant Singh Rajput.

Rhea Chakraborty, questioned for a second straight day on Monday over drug abuse allegations in the Sushant Singh Rajput case, made an emotional declaration according to sources, telling the Narcotics Control Bureau - "Whatever I did, I did for Sushant".

Ms Chakraborty, 28, who has been accused of involvement in the death of Mr Rajput, 34, on June 14, is being questioned after the NCB arrested her brother, Showik Chakraborty, and charged him under sections of the anti-narcotics law.

Ms Chakraborty was confronted with her brother during Monday's questioning, which started around 9.30 AM and lasted for several hours.

NCB sources said the actor firmly denied all charges of consumption of drugs. The source also said, however, that she was evasive on certain questions.

Ms Chakraborty told NDTV in August that she had never consumed drugs but did try and stop Mr Rajput from doing so. She has also repeatedly said she expressed concern for his mental and physical health.

The Narcotics Control Bureau claims to have evidence linking Showik Chakraborty and Samuel Miranda (Mr Rajput's house manager) to the purchase of marijuana.

The NCB has claimed that Dipesh Sawant (a member of Mr Rajput's domestic staff) collected and delivered a total of 165 grams of marijuana between March and June - on orders from Rhea and Showik Chakraborty. Sawant also told the NCB he saw Mr Rajput smoke marijuana in September 2018.

However, no drugs have been recovered from Mr Chakraborty, so far, and the NCB case hinges on the seizure of 59 grams of curated marijuana from two alleged drug peddlers and their purported links to Mr Rajput. 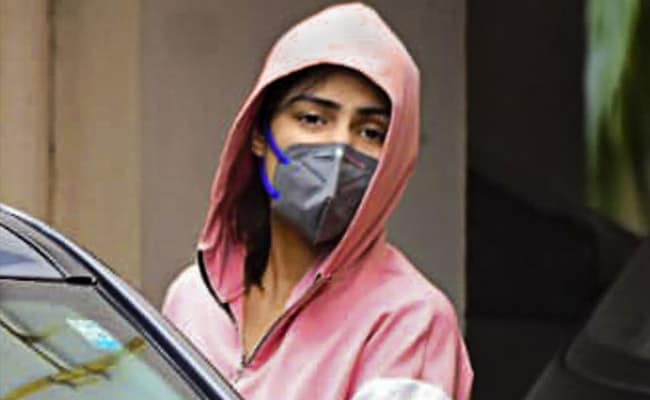 Rhea Chakraborty has been questioned for two straight days

The NCB registered an interest in this case after WhatsApp chats between Ms Chakraborty and a contact believed to be Samuel Miranda - about procuring drugs - was red-flagged by the Enforcement Directorate.

The ED is probing allegations that Ms Chakraborty illegally transferred crores from Mr Rajput's Mumbai bank accounts. No evidence of money laundering has been found so far.

Ms Chakraborty - now the subject of investigation by three central agencies - the NCB, the ED and the CBI - spoke to NDTV about the pressure that her family and she were under.

She had earlier shared video footage of her father - a retired Army doctor - being mobbed by reporters and asked: "How is this family going to live?"

She was also targeted by the Bihar Police chief last month; in a shocking comment the top cop said Ms Chakraborty did not have the aukat (stature) to comment on Bihar Chief Minister Nitish Kumar.

Ms Chakraborty hit back at the gendered comment, telling NDTV in a live interview that "my aukat is that Sushant Singh Rajput, who everyone claims to love, loved me".

The actor, who has been repeatedly targeted online by trolls and hounded by reporters while appearing for questioning (with little regard to social distancing during the Covid pandemic), earlier also hit out at those who accused her of stealing Mr Rajput's property.

While being questioned by the ED last month, she released a photograph of the "only property" of the late Bollywood star she said she owned - a water bottle and a hand-written note.