The Supreme Court did not agree with the submission that the lions there appear to be more aggressive, saying the impression depends on the mind of the person. 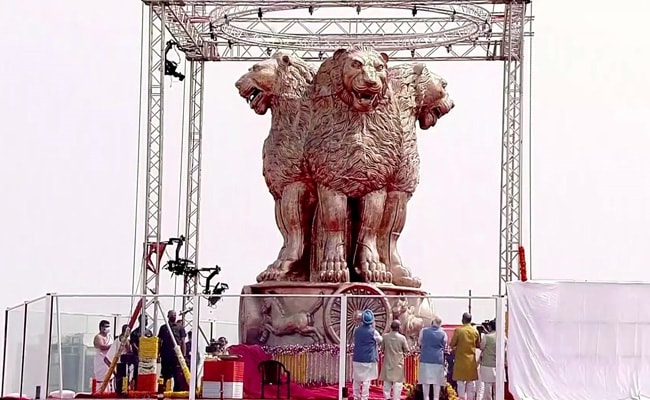 The Supreme Court on Friday dismissed a plea that alleged that the design of the national emblem atop the new Parliament building violates the State Emblem of India (Prohibition Against Improper Use) Act, 2005.

The top court also did not agree with the submission that the lions there appear to be more aggressive, saying the impression depends on the mind of the person.

The petition came up for hearing before a bench of Justices M R Shah and Krishna Murari which observed that it cannot be said that the national emblem installed there is violative of the 2005 Act.

The petition, filed by advocates Aldanish Rein and Ramesh Kumar Mishra, had submitted that the lions portrayed in the national emblem appeared to be "ferocious and aggressive" with their "mouth open and canine visible".

It had claimed that the change in the design of the State emblem is manifestly arbitrary.

The state emblem of India is an adaptation from the Sarnath Lion Capital of Emperor Ashoka which is preserved in the Sarnath Museum. The Lion Capital has four lions mounted back to back on a circular abacus.

Opposition members and activists have accused the government of distorting the national emblem by replacing the "graceful and regally confident" Ashoka lions with those having menacing and aggressive postures and sought immediate change.

Prime Minister Narendra Modi on July 11 unveiled the national emblem cast on the roof of the new Parliament building and also attended a religious ceremony at the site.