Initially trapped at a depth of 26 feet, Sujith Wilson slipped to about 88 feet during attempts to pull him up by tying ropes around his hands.

Trichy, Tamil Nadu: Sujith Wilson was declared dead after over 80 hours in the borewell.

Two-year-old Sujith Wilson, who fell into an abandoned borewell in Tamil Nadu's Tiruchirappalli district on Friday, was found dead, his body decomposing, early this morning after 82 hours of non-stop rescue efforts. Sujith's dismembered body was taken straight to the cemetery for a funeral after doctors at the Manaparai Government Hospital conducted an autopsy.

Three ministers offered floral tributes to the child outside the hospital. A large number of people gathered at the cemetery ahead of the funeral.

After several unsuccessful attempts, a wider tubewell was drilled over the last two days, two metres away from the borewell in which Sujith fell to reach him through a tunnel as he lay trapped at a depth of 88 feet. The drilling was stopped midway on Monday night at around 40 feet because of the difficult, rocky terrain.

The rescue was called off after a stench emanated from the old borewell, suggesting the child had died. A senior officer overseeing rescue told NDTV, "Dismembered body parts only were pulled using hooks and ropes through the same borewell the boy remained trapped. We did not drill any further."

Sujith fell into the borewell on Friday around 5:45 pm while playing on the family's farm. Initially, he was trapped at a depth of 26 feet but slipped to 88 feet during attempts to pull him up by tying ropes around his hands. Sujith Wilson fell into a borewell in Tamil Nadu's Trichy on Friday.

Although several voluntary groups, fire and rescue officials, state and national disaster relief forces, worked relentlessly from Friday evening, the government has been criticised that it missed the crucial golden hour period adopting a trial-and-error approach.

At first, several voluntary groups from Tamil Nadu's Madurai, Coimbatore and Tirunelvelli, with robotic rescue devices and prior rescue experience, attempted to pull the boy out by trapping his hand in a rope. However, the boy slipped and fell deeper into the well.

Only after these unsuccessful attempts, the National Disaster Response Force or NDRF was alerted the next day. The decision to dig a wider borewell was taken on Saturday and drilling work began only on Sunday.

"The government has put in so much of hard work without a scientific approach. Had they planned well, the boy should not have been let to slip further deeper," Ponraj, an advisor to late President APJ Abdul Kalam, said.

Three ministers, including Health Minister Dr Vijayabaskar, camped at the site from Day One, overseeing rescue efforts even on Diwali. However, the government was accused of trying to score political points by turning the rescue into a PR exercise. 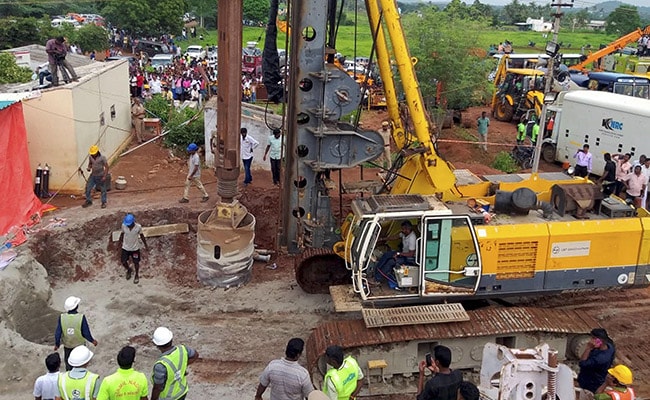 Although at least 10 lives have been lost in similar tragedies in as many years in Tamil Nadu alone, experts point out there is no standard operating procedure to handle such crises. These are still tackled by local authorities in a haphazard way, they say.

Although several voluntary groups have developed robotic rescue devices, none have been either been officially validated.

"We have developed Chandrayaan (India's moon mission) but we have not developed a life-saving technology for saving lives underground like this. Hope we learn lessons and put in place a system to follow," a senior member of UNICEF said.

The state government, however, said it did its best. "We deployed the best technology," Deputy Chief Minister O Panneerselvam said. Senior government official Dr J Radhakrishnan said, "While all groups were invited to give suggestions, the rescue was done in a coordinated way including voluntary groups, fire and rescue department, NDRF, SDRF (State Disaster Response Force), ONGC (Oil and Natural Gas Corporation), (state-run mining company) NLC and several others."

The media, which covered the rescue live from close quarters since Friday evening, too came under criticism as several channels telecast disturbing images of the trapped child's hands. "The place should have been out of bounds for media and officials should have briefed the media at a designated spot every hour," said a senior journalist.