Government officials had earlier said that rescuing Sujith Wilson would have taken half a day more. However, a foul smell emanating from within the borewell led authorities to declare the boy's death.

A two-year-old boy who fell into a borewell in Tamil Nadu's Tiruchirappalli on Friday was declared dead by officials early Tuesday morning. Sujith Wilson's body had decomposed inside the borewell. A rescue operation that involved digging a parallel tunnel to get to the toddler was called off soon after the body was found.

Last night, government officials had said rescuing the boy would have taken 12 more hours. A stench rising from the borewell confirmed their worst fears - the child had died after over four days in the tunnel without food or water. Officials retrieved Sujith Wilson's dismembered body from and sent it for a postmortem.

"The 2-year-old boy's body is now in decomposed state. We tried our best to rescue him but unfortunately foul smell has started coming from the borewell in which the child had fallen. The digging process has been stopped," J Radhakrishnan, Principal Secretary in the Transport Department and the Relief Commissioner told reporters. 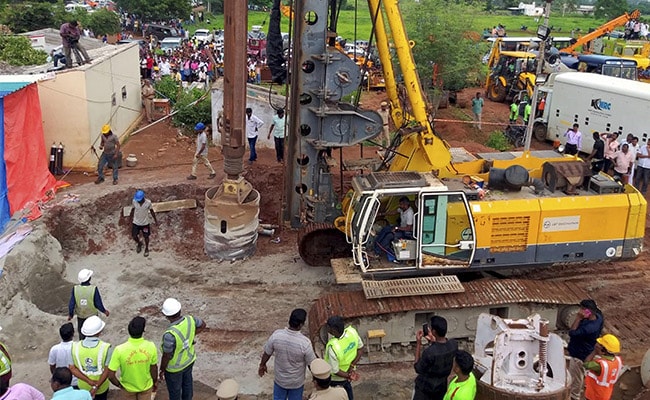 The operation to rescue Sujith Wilson was slow because of rocky terrain and complex procedures. (PTI)

Sujith Wilson was playing near the abandoned borewell on Friday evening when he fell inside. Progress on the rescue was slow because of rocky terrain and complex procedures, including drilling the parallel tunnel to reach the boy while ensuring the passage of oxygen to enable him to breathe in the closed space.

Authorities had earlier said Sujith was trapped at a depth of around 26 feet. Attempts to pull him up using a rope are believed to have caused him to fall further below to a depth of 88 feet. It is still not known how deep the borewell is; officials guessed it could be anywhere between 600 to at least 1,000 feet down.

Thousands of people followed the rescue closely as politicians and celebrities came out with prayers and calls to save the boy. Many have alleged a "trial and error" approach by the state government. Those critical of the operation claimed the National Disaster Rescue Force or NDRF was summoned nine hours after the rescue effort began.

Prime Minister Narendra Modi had said "every effort" was being made to ensure the child was safe. Congress leader Rahul Gandhi, actor-turned-politician Kamal Haasan and actor Rajinikanth had all expressed concern for Sujith's safety.

Some Tamil Nadu ministers monitored rescue efforts at the spot along with senior state officials.