More than 40 hours after Sujith Wilson, a two-year-old boy, fell down an abandoned borewell in Tamil Nadu's Trichy district, rescue teams, including those from the National Disaster Response Force (NDRF), have been unable to reach him. Sujith had initially been trapped at a depth of around 26 feet but attempts to pull him up by knotting ropes around his hands led to him slipping to 70 feet. Authorities are now trying to dig a parallel tunnel - a metre wide - and then connect via a horizontal passage. The condition of the young boy is not known; oxygen is being supplied but there are concerns because he has stopped responding to calls.

"A parallel borewell is being dug... efforts are on... we have a technical team at the spot comprising
officials from L&T, ONGC, Neyveli Lignite Corporation,"J Radhakrishnan, Principal Secretary, Revenue Administration, Disaster Management and Mitigation, was quoted in a report by news agency PTI.

"The Chief Minister has issued orders to ensure that rescue efforts be carried out without any hindrance," he said, adding that nearly 300 people were involved.

According to police, Sujith, who had been playing near the borewell, fell in at around 5.30 pm on Friday night. There are conflicting reports about the depth of the hole- some say it is 600 feet deep, while others say it is at least 1,000 feet.

Earlier attempts to reach the boy by excavating nearby areas with the help of earth movers were called off after the machines hit a layer of rock.

On the occasion of Diwali, south superstar actor Rajinikanth offered his prayers for Sujith's safe return. 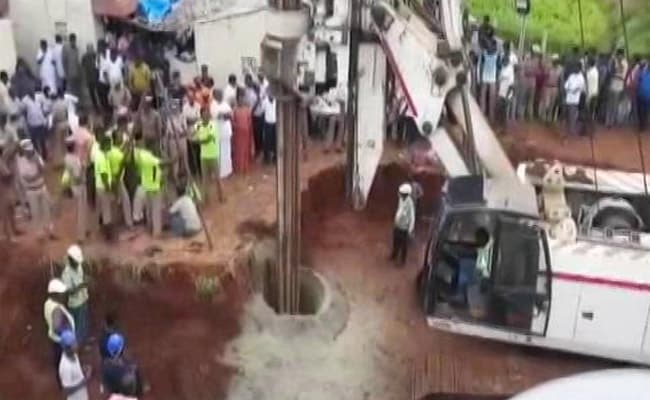 Authorities are trying to dig a metre-wide parallel borewell

"I pray wholeheartedly for the safe return of Sujith... various machines are trying to rescue him. The government and officials are working well... they have been working hard and cannot fault them," he said, requesting the government take necessary precautions for the safety of children, "I think precautionary measures should have been taken".

"In Tamil Nadu it is a cause for worry that children fall into such deep wells. The government must be fined for failure to close deep, abandoned wells," the Makkal Needhi Maiam (MNM) chief wrote in Tamil on twitter.

Congress leader Rahul Gandhi tweeted, praying for Sujith to be "rescued and reunited with his distraught parents".

While the nation celebrates Deepavali, in Tamil Nadu a race against time is underway to save baby Surjeeth, who has been trapped in a borewell since Friday. I pray that he will be rescued & reunited with his distraught parents at the earliest ????#savesurjeeth

According to news agency ANI, devotees at the Madurai Meenakshi Amman Temple in Madurai district have also offered prayers for Sujith's safety.

"Every Diwali, my family and I visit Meenakshi Amman temple. But, we got to know about a boy named Sujith who slipped and fell into a deep well. He must be rescued alive and we all prayed for him today," one devotee, Santosh, said.

Despite several such tragedies in the past, police, fire, rescue and disaster management teams do not have a standard operating procedure. The crisis is often handled with a trial-and-error approach that results in time being wasted and, sometimes, in a tragic ending.