Amit Shah visits Bengal: The controversy has provided the Trinamool with ammunition to attack the BJP ahead of Assembly polls due next year; a party tweet dismissed the BJP as "bohiragato (outsiders)" 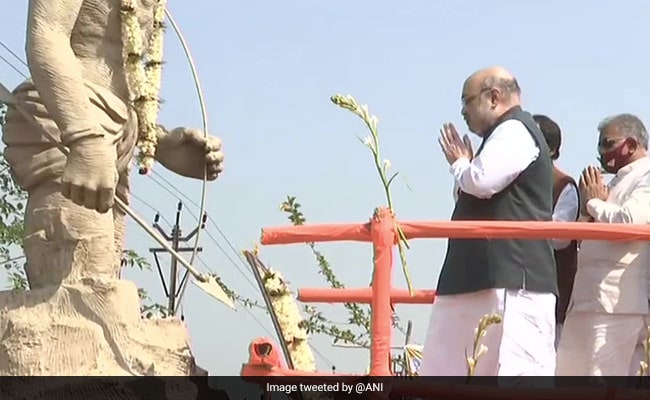 An embarrassing controversy has erupted over a statue that featured prominently during Union Minister Amit Shah's visit to Bengal's Bankura district on Thursday.

Mr Shah, on the first of a two-day visit to Bengal to kickstart BJP's preparations for Assembly elections next year, was in Bankura to tap tribal votes. The district is part of the tribal-dominated Jangalmahal area of Bengal.

Mr Shah's first stop was to garland a statue of Birsa Munda, the legendary tribal leader who fought for India's independence and was killed at the young age of 25. However, at the last minute, tribal leaders pointed out to the BJP that the statue was not of Birsa Munda at all, but a general tribal hunter.

Realising the faux pas, BJP hastily placed a portrait of the tribal leader at the foot of the statue. Amit Shah showered petals at the statue and garlanded the portrait.

After his visit he tweeted: "Paid floral tributes to legendary tribal leader Bhagwan Birsa Mundaji in Bankura, West Bengal today. Birsa Mundaji's life was dedicated to the rights and upliftment of our tribal sisters and brothers. His courage, struggles and sacrifices continue to inspire..."

Birsa Munda ji's life was dedicated towards the rights and upliftment of our tribal sisters & brothers. His courage, struggles and sacrifices continue to inspire all of us. pic.twitter.com/1PYgKiyDuY

Now, though, an organisation of tribal leaders - the Bharat Jakat Majhi Pargana Mahal - has declared itself upset over what they feel is an insult to Birsa Munda. Today, people from the local tribal community reportedly sprinkled Ganga water around the statue to "purify" it.

The controversy has also provided the ruling Trinamool with ammunition to attack the BJP ahead of next year's election. 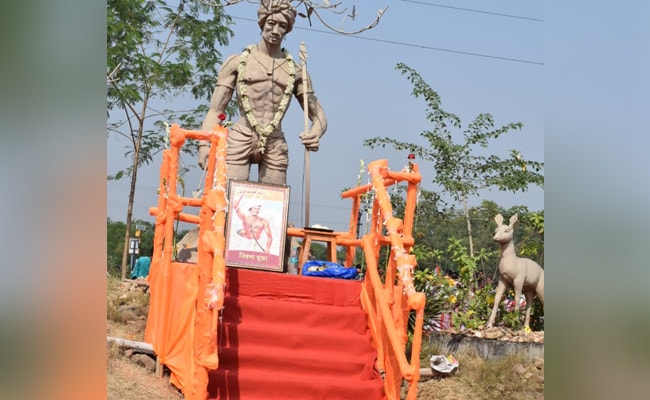 'Bohiragato' are at it again! Union Home Minister Amit Shah is so ignorant of Bengal's culture that he insulted Bhagwan Birsa Munda by garlanding a wrong idol and placed his photo at someone else's foot. Will he ever respect Bengal?" the party tweeted this morning.

Trinamool MP Nusrat Jahan referred to the Birsa Munda faux pas and the Ishwarchandra Vidyasagar episode - a statue of the legendary 19th century reformer was vandalised, allegedly by BJP workers, before Lok Sabha polls in May - to hit out at the BJP's "blatant disrespect to legendary Bengal icons".

"From Ishwarchandra Vidyasagar to Birsa Munda, what is this blatant disrespect towards Bengal's legendary icons, Amit Shahji? How many more times will you misuse Bengal's culture and heritage for your political propaganda?"

Mr Shah is in Bengal to galvanise party leaders and workers and sharpen efforts to wrest power from Ms Banerjee's Trinamool. 200 of 294 seats - that is the target the Home Minister set for his party during his fiery speech yesterday.

Thumping the podium on stage at Bankura, Mr Shah said: "...today I am saying this in Bankura that, with the blessings of Birsa Munda, BJP will come to power with at least 200 seats."

During his speech yesterday he also claimed he could sense "massive public anger against the Mamata Banerjee government" and that the "death knell" of her administration had been rung.

Forming the Bengal government has been a long-standing target of the BJP - which has never ruled the state - particularly after a bitterly-fought campaign during last year's Lok Sabha election.

The BJP recorded strong gains in the parliamentary polls, winning 18 seats (up from just two in 2014) of 42 seats, and is now a real threat to Ms Banerjee and her fight for a third straight term.