Srinagar at Minus 5.4, Dal Lake Freezes Over 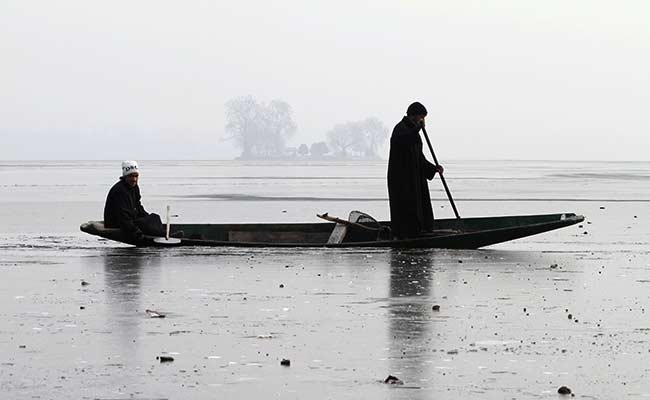 A Kashmiri boatman breaks the frozen surface of Dal Lake as they row past on a cold and foggy morning in Srinagar, India, Thursday, Jan. 1, 2015.(AP)

Srinagar: Leh and Kargil towns in Ladakh region recorded the season's coldest night as the cold wave intensified in Jammu and Kashmir.

She said this was the coldest night of the season so far in the frontier town which was also the coldest recorded place in the state.

Kargil, also in Ladakh region, too recorded the season's low of minus 16.1 degrees Celsius compared to the previous night's minus 15.8 degrees Celsius, the official said.

Srinagar had witnessed the season's coldest night on December 27 when the night temperature dropped to minus 5.6 degrees Celsius.

Promoted
Listen to the latest songs, only on JioSaavn.com
Parts of many water bodies, including the famous Dal Lake, were frozen due to biting cold, which also led to freezing of water taps and developing of a thin layer of frost on roads.
The mercury in Qazigund, the gateway town to Kashmir Valley in south, settled at a low of minus 5.2 degrees Celsius, the official said.

Pahalgam resort in south Kashmir, which serves as a base-camp for the annual Amarnath yatra, registered a minimum temperature of minus 7.6 degrees Celsius, against the previous
night's minus 7.2 degrees Celsius, she said.
Comments
coldDal LakeSrinagarDal Lake Freezescold in Jammu and Kashmir