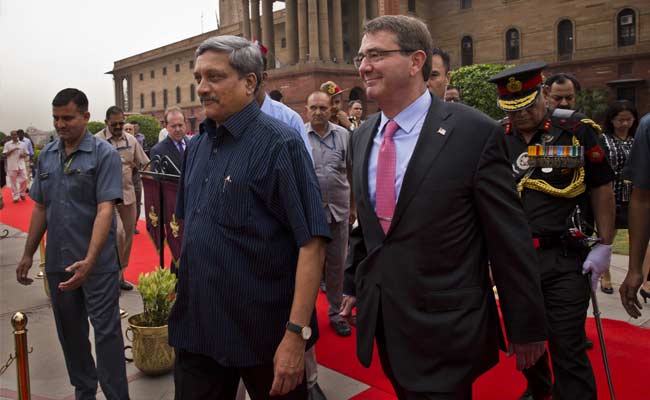 US Defense Secretary Ashton Carter visited India in April where ties between the two countries were discussed with Defence Minister Manohar Parrikar.

China's aggressive behavior in the South China Sea has complicated the U.S. pivot to Asia. But those same antics, plus some Chinese muscle-flexing off the coast of the Indian subcontinent, may well give the pivot a new lease on life - in a different ocean.

Indian military officials and policymakers, for decades obsessed with Pakistan, are now growing increasingly worried by what they see as threatening moves by China. Beijing's growing blue-water navy is becoming more active in the Indian Ocean, with bigger ships spending more time there than ever before. China is inking port deals across India's watery backyard, from Sri Lanka to Djibouti, that many in New Delhi see as a threat to Indian security.

With a still-unresolved border dispute simmering between the two countries, and with recent Chinese moves in the South China Sea providing an alarming glimpse of what a rejuvenated Beijing is really after, India seems closer than it has in years to embracing closer ties with the United States by jettisoning decades of non-aligned foreign policy.

"Of course there has been a change in India's strategic vision," retired Vice Adm. Anup Singh, who until 2011 headed the Indian Navy's Eastern Command, told Foreign Policy. India's BJP government and security officials are "all in favor of a solid handshake with the United States, because that is the only way to maintain the balance of power."

Those closer ties are finally being realized after an April visit to India by U.S. Defense Secretary Ashton Carter. After years of frustration seeking to turn New Delhi into a strategic partner, plagued especially by bogged-down talks on increased defense cooperation between the two countries, the U.S. and India at last reached agreement in principle on a deal to allow each nation's militaries to use the other's naval, land, and air bases to resupply and pre-position hardware.

The accord will probably open the way for other deals on sharing nautical data and arranging secure communications. Following years of discussions, the two governments have launched joint research and development projects, collaborating on aircraft carrier and jet engine designs. India and the United States are now working together in particular to hone anti-submarine warfare techniques, given the pace of Chinese sub deployments to the Indian Ocean.

In the meantime, defense trade between the two powers reached $14 billion last year.

For years, India foot-dragged over the completion of some of the accords, such as the logistics-sharing arrangement that would, in the near term at least, be more beneficial to the U.S. Navy than the Indian Navy. Spooked by the specter of an expansive China, though, India is shedding decades of diplomatic standoffishness.

"The deals are very significant because they indicate that Indian policymakers are beginning to realize that there could be more benefits elsewhere, namely strategic deterrence against China," said retired Indian Capt. Gurpreet Khurana, who since 2003 has run India's National Maritime Foundation.

Tellingly, Carter's visit marked the first time a U.S. defense secretary visited India's Eastern Command, the slice of India's Navy most focused on China, and which is home to the bulk of India's most advanced ships, including nuclear submarines and an aircraft carrier.

Not only has New Delhi turned a new page with Washington, India's top brass has shifted its approach to Japan and Australia, pursuing naval cooperation and inviting the two countries for the first time to exercise and sail in the Indian Ocean. India is also pursuing closer ties with Vietnam.

"Is this driven by China? I think so. I think clearly it is," said Adm. Jon Greenert, who retired last year as head of the U.S. Pacific Command overseeing American forces across Asia.

"The Indian Navy's interest in moving further east in the Indian Ocean and coming into the Pacific to exercise is an indication of that," he told FP. Until recently, India's navy focused solely on the west of the Indian Ocean and had no interest in operating at long distances from its coast, he said. Especially after the 2008 Mumbai terror attacks, India has been forced to increase patrols of its vulnerable shoreline.

China's behavior in the South China Sea - including the construction of artificial islands, expansive territorial claims, and the dispatch of advanced military equipment to disputed rocks and reefs - has spooked nearly all of its Asian neighbors. Some Indians, still scarred by the 1962 war with China, point to what Beijing is doing there as proof that China can't be trusted. But what's really got New Delhi worried is Beijing's seemingly more innocent behavior in the Indian Ocean itself.

After fits and starts, Beijing reached a long-term deal for access to a deepwater port in Sri Lanka, right on India's doorstep. That deal alone was a wake-up call in India, especially as a Chinese submarine paid Sri Lanka a very public port call in the middle of negotiations.

The Indian government reportedly encouraged a change in Sri Lanka's leadership in early 2015, in part to ensure that the tiny island was ruled by a government less friendly to Beijing.

Since then, China has for the first time arranged for an overseas base, in Djibouti. In between, China has steadily increased its footprint with port accords in Pakistan, basing agreements in the Seychelles and outposts on the Comoros Islands; late last year, a Chinese firm started work on a new port in Mozambique.

Those are not military bases of the sort which the United States maintains all around the world, and are nominally more about developing China's commercial reach through the world's main shipping lanes; China has an ambitious plan to re-create the ancient "silk road" by land and by sea. Nonetheless, such "dual-use" facilities cause concern across the whole region.

New Delhi worries about what China is trying to achieve with its "string of pearls" across the Indian Ocean, Greenert said. "They are looking at it with apprehension."

Now that Beijing has openly declared its intent to build and deploy a blue-water navy that can operate far from home, Chinese naval presence in the Indian Ocean is visibly ramping up. For eight years, China has maintained an anti-piracy flotilla in the Indian Ocean, and the ships comprising that fleet are getting bigger and more advanced, though attacks by Somali pirates have fallen dramatically. Chinese submarines and much bigger ships, like amphibious docking ships that can carry troops and aircraft, are routinely present in the area.

"All of this is meant to exercise their naval muscles," Singh said. Another retired senior Indian admiral, Raja Menon, wrote last month that closer U.S.-Indian ties could make it easier to push back against China right where it hurts - in the strategic chokepoint of the Strait of Malacca, through which China imports much of its oil and natural gas.

"There's nothing more likely to ensure a peaceful Chinese rise than the ability to squeeze the Malacca jugular as a strategic threat," Menon wrote.

U.S. officials are still not convinced China will succeed in building a logistical network in the Indian Ocean that could be used by its expanding navy, as regional governments may draw the line at any deal that appears to open the door to military bases that encroach on sovereignty.

Plenty of analysts take a more sanguine view of China's activities. The anti-piracy patrols, for example, have for years been heralded by U.S. and European naval officials as China's contribution to protecting the global commons, notes Nilanthi Samaranayake, a South Asia analyst at the Center for Naval Analyses, a think tank.

The submarine visits are public and transparent, not sneaky. And any rising power with a growing navy will naturally operate farther from home. The Chinese port deals, including one as a far away as Greece, are more about the world's biggest exporter protecting its economic interests, many stress, than preparing secret naval-bases-in-waiting.

That's one reason many in India are still cautious about openly getting on the U.S. bandwagon, despite the recent bilateral defense deals.

"India is always going to be hedging a little bit, because they don't want to be seen as antagonizing China too much," Samaranayake said.

Still, if China exports the same kind of behavior to the Indian Ocean that it's been inflicting on neighbors in the South China Sea - including dispatching oil rigs to disputed waters and ramming fishing vessels from other countries - then India could jump off the fence in a hurry.

"If we actually see China be aggressive in the Indian Ocean, that could really help crystallize Indian policy toward China and move the relationship with the U.S. forward," Samaranayake said.

(This story has not been edited by NDTV staff and is auto-generated from a syndicated feed.)
Comments
South China SeaIndia-US TiesIndo-China Relations