The floods that dampened Onam 2018, the harvest festival of the southern state, did not, however, dampen the spirit of the state that remained in the news not just for the havoc the heavy rain created, but for its reprising sense of humanity in a time of grief 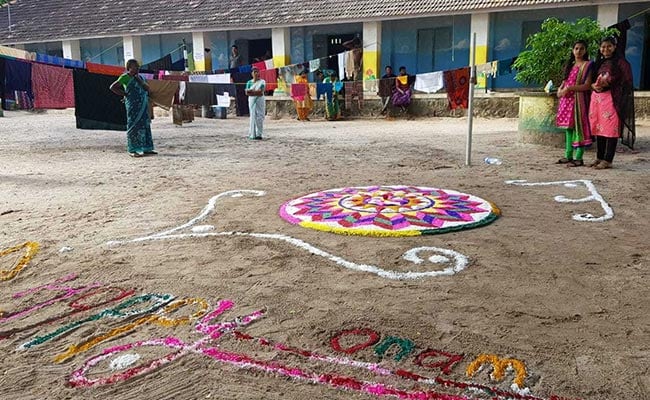 Onam Celebration: A relief camp in Alappuzha where women gather to celebrate Onam.

Houses decked up, colourful flower rangoli or pookalam outside homes and people dressed in the traditional white attire. While this would be the start to a typical Onam day, this year, people across Kerala are picking up the pieces and trying to get back on their feet after the state saw the worst flood in a century, killing over 300 people.

The floods that dampened Onam 2018, the harvest festival of the southern state, did not, however, dampen the spirit of the state that remained in the news not just for the havoc the heavy rain created but for its reprising sense of humanity in a time of grief. This was echoed in the Onam wishes across the country.

The Kerala government earlier this month cancelled Onam celebrations, a first in the state. Chief Minister Pinarayi Vijayan then announced diversion of the Rs 30 crore, set aside for the festivity, to the Chief Minister's Distress Relief fund. Reports also suggest cancellation of Onam events by Kerala expatriates from the Middle East and other countries.

Temples across the state that are usually adorned with flowers and lamps were left plain in view of the floods. Officials at Shri Ayyappa Temple in Anachal told ANI, "There are no celebrations this year & we haven't decorated the temple as the people are suffering because of floods."

Mr Vijayan, in his Onam wish in Malayalam on Twitter, spoke of a better tomorrow, "Our society is the one who faces the difficulties. We will survive toxic substances that we are facing today. Tomorrow we will make good memories. For all the Malayalees all over the world," he tweeted.

With over a million people displaced due to the floods, people in Kerala are somehow celebrating Onam at relief camps. These camps and volunteers in the state who have been monumental in rebuilding Kerala, are trying to boost the spirit of Onam in this time of suffering. Local news reports suggest that most relief camps across the state would provide free Onam lunch to lakhs of people who were left homeless.

At one such relief camp in Alappuzha, women cheer and dance in celebration. "Our home is not what we can talk about right now. We cannot go there for a long time, the little celebration is our idea of joy," said one of the women at the camp. Most of those at the camp have lost their homes and family.

The camp has a decorated rangoli made of salt and color as they could not affort flowers. "Nothing is lost, everything will be regained, this is the spirit we want to share," says a volunteer at the camp.

Happy Onam. Camps are celebrating Onam in high spirits: sumptuous feasts, games for children , cultural performances and merriment. Great ! We have succeeded in totally transforming the usually morose airs of the camps. My Onam feast at SDV school with playback singer smt Chitra

The devastating floods saw the country stand with Kerala through the days of hardship and Onam wishes from across the country resonated the sense of recovery marking "new beginning".

Good wishes to fellow citizens, particularly to our brothers and sisters in Kerala, on Onam. May this festival mark a new beginning for all those in Kerala recovering in the aftermath of the floods, and gradually beginning to rebuild their lives #PresidentKovind

May this Onam give further strength to the people of Kerala to overcome the adversities they have been facing for the past few days. The entire nation stands shoulder to shoulder with Kerala and prays for the happiness as well as prosperity of it's citizens.

This is a difficult time for the people of Kerala. In relief camps & homes across the state, people are grieving for their loved ones. On this Onam let us pledge to put aside our differences, stand united together and focus on the task of #RebuildingKerala.

Happy Onam to our brothers and sisters in Kerala. All of us Indians stand with you in rebuilding your beautiful state. pic.twitter.com/sTiNR6thO5

Wishing my Malayalee brothers and sisters a #HappyOnam. We are sure you will overcome the pain of the destruction caused by the devastating #KeralaFloods and prepare for a bountiful harvest next year.

The agony and distress faced by Kerala is matched by its verve and spirit in meeting the challenge. Warmest wishes for Onam. To better times

Today, 25th August, is d main day of Onam called Thiru Onam. Onam is biggest festival of Kerala.On this occasion I send my best wishes 2 brave people of Kerala.Despite flood devastation, I am sure they will recover and emerge as one of d foremost people of India, as I regard them

Amidst the suffering caused by the floods in Kerala, let us draw inspiration from the auspicious festival of Onam to come together and overcome these challenges. My heart reaches out to the people of Kerala. May Lord Mahabali bless you with strength.

#HappyOnam to all. Let this festival of harvest bring back lost charm of Kerala and energize them to rebuild the state.

Onam 2018 dates are celebrated from August 15 to August 25. Considered the state's harvest festival, 'Onam' falls in the beginning of Chingam, the first month of Malayalam Calendar and is celebrated all over the state by people across communities.

Elaborate feasts (Onam sadya), folk songs, dances and boat races mark the annual festival. This time, however, the flood-affected families have decided against any Onam 2018 celebrations.