After Worst Flood In A Century, Kerala Stares At Long Road To Recovery

Many people in remote areas expect the officials to expedite the assessment process so they could qualify for the Rs 4 lakh compensation from the government.

Kerala Flood: Almost all the houses in the area are damaged by the flood

A day after Kerala Chief Minister Pinarayi Vijayan announced Rs 4 lakh compensation for those who lost their houses in the flood, NDTV travelled to a remote place in Thrissur to get a sense of how big is the devastation and the rebuilding challenge.

Around 40 kilometers away at Kottaimuri, a carpenter named Dasan returns every day and sits on the ruins of his completely collapsed house, hoping to meet officials who would come to assess damages. With tears in his eyes he recollects how he lost his house: "On the 16th of August, water rose upto twelve feet. We could do nothing. We have lost everything. I don't even have clothes".

Even though he's over 40 kilometers away from the district headquarters at Thrissur, the carpenter is not worried about the compensation as much as he is about his 80-year-old mother. He says, "I am scared what will happen to my mother if she sees this. I can't live if anything happens to her". 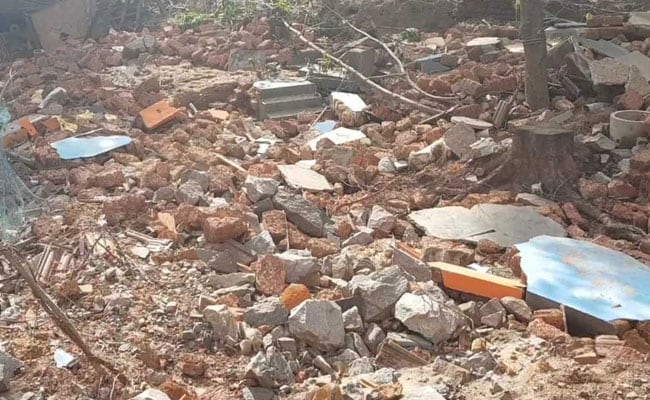 The area has about 18 villages, which are part of Mala panchayat

Another carpenter TU Shahji has left his wife and two children at a relief camp. All he managed to salvage from his house was a few utensils and a fan. He has no source of income because his tools were washed away. He says, "I have no money even to rent a house. No money in the bank. We live hand-to-mouth every day".

Almost every house in the area has been damaged partially. Joseph and Lia, a couple, are busy clearing their kitchen that collapsed. "No official has come yet to assess the damage," says Joseph.

The area has about 18 villages, which are part of Mala panchayat, with a population of approximately 40,000.

The authorities say that damage to infrastructure is massive. "In Mala Panchayat, the damage could be estimated to be of about Rs 150 crore. This village has suffered a loss of Rs 12-15 crore in terms of houses, roads, electricity among others".

Kerala Agriculture Minister Sunil Kumar said the centre was giving just Rs 95,000 as compensation for damaged houses but "we are giving them an additional Rs 3 lakh."

Many in remote areas hope officials would expedite the assessment process so they could qualify for the government compensation.