"Had BJP Got 250": Jagan Reddy On Special Status After Meeting With PM

Special category was the theme around which Jagan Reddy had built his campaign. He had even promised to support anyone at the centre who was ready to give the state Special Status - seen as a bargaining chip in case of a fractured verdict or a slim margin of victory in the national elections.

"I discussed with the number one and number two persons in the country and they have promised help to us," said Jaganmohan Reddy after his meeting with PM Modi and BJP president Amit Shah.

After the meeting, PM Modi tweeted: "Had an excellent meeting with Andhra Pradesh's CM designate @ysjagan. We had a fruitful interaction on several issues pertaining to AP's development. Assured him all possible support from the Centre during his term."

Special category was the theme around which Jagan Mohan Reddy had built his campaign. He had even promised to support anyone at the Centre who was ready to give the state Special Status - seen as a bargaining chip in case of a fractured verdict or a slim margin of victory in the national elections. His YSR Congress has won all 22 of the state's 25 Lok Sabha seats.

"I prayed to God that there should be no absolute majority at the Centre so that we could bargain and seek SCS. That could not happen but we will continue to demand Special Category Status and persist till they give," Mr Reddy said.

But after the BJP's landslide victory at the Centre, he did not hold out much hope for it, pointing to the size of the party's mandate. The BJP alone won 303 of the 542 seats in the Lok Sabha, up from its score of 282 in 2014.

"If the BJP had been been limited to 250 seats, we wouldn't have had to depend so much on the central government. But now, they don't need us. We did what we could do and told him (PM) of our situation," Mr Reddy told reporters after the meeting.

For the last five years, the government had repeatedly refused Special Category status to Andhra Pradesh, even when ally Chandrababu Naidu had asked for it, saying new rules now confine it only to the hill states. It was a huge bone of contention between Centre and Chandrababu Naidu, who quit the NDA last year. 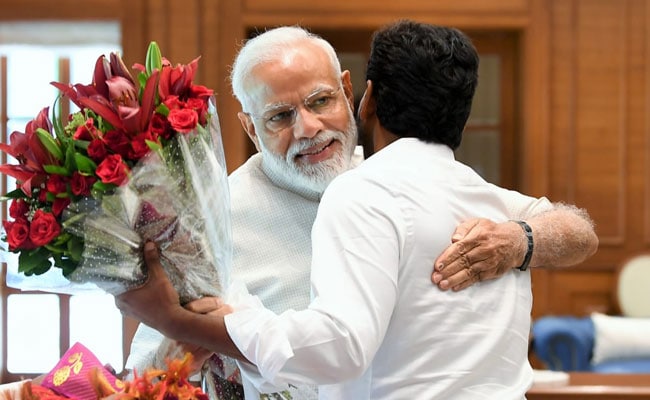 Prime Minister Modi had told Chandrababu Naidu that he was falling into a trap set by Jaganmohan Reddy when he quit the NDA over the issue.

The Special category status was promised to the state by the erstwhile UPA government in 2013 when Telangana was carved out of it, and the state capital Hyderabad was granted to the new state.

It became a huge political issue in the state that practically wiped out the Congress and five years down the line, Chandrababu Naidu as well.

Mr Reddy on Sunday said, "One thing I can tell you -- I have nothing against Chandrababu Naidu. My duty is that of a custodian. Today I'm going to promise you our government will be revolutionary. Within six months or one year, I'll make sure this government stands as example to the country".