Dera Sacha Sauda chief Gurmeet Ram Rahim Singh was convicted by a court in Haryana's Panchkula in a rape case that dates back to 2002.

Gurmeet Ram Rahim Singh was flown out of Panchkula in a helicopter after the verdict.

Panchkula: Gurmeet Ram Rahim Singh, a self-styled spiritual guru and head of the Dera Sacha Sauda sect, has been moved to a prison in Haryana's Rohtak. The rape convict will be lodged in a special cell, will get bottled mineral water and an assistant to stay with him, sources in the Haryana jail said.

A court in Panchkula has found Ram Rahim, 50, guilty of raping two women followers in 2002. He made a dramatic entry at the court yesterday afternoon, driving 250 kilometres to Panchkula from Sirsa, where his sect is headquartered, in a bulletproof car. There were about 200 cars in his convoy as ardent devotees followed him.

After being convicted and arrested, the Dera chief was taken to Rohtak by helicopter. Video from the court premises showed a woman carrying out several bags and pieces of luggage as he left. 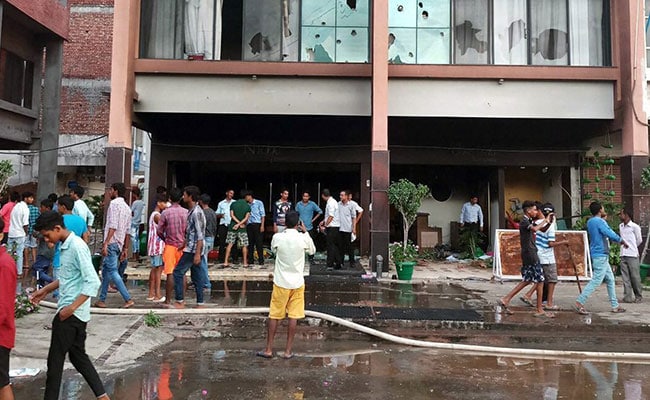 Public and private property was damaged by followers of Ram Rahim after the verdict.

After he landed in Rohtak, Ram Rahim was taken to a police guest house that served as a makeshift jail. He was shifted to a prison only much later in the evening.

In court yesterday, the self-styled godman, dressed in white clothes and with his long hair loose, stood with his hands folded in prayer and his eyes closed when the judge started reading the verdict. He will be sentenced on Monday.

After the judgement was announced, thousands of his followers gathered in Panchkula erupted in violence, attacking and setting on fire vehicles and public property and clashing with the police. There were clashes in Sirsa too. 31 people have died and about 250 have been injured.

Promoted
Listen to the latest songs, only on JioSaavn.com
There has been violence in other parts of Punjab and Haryana too, as well as incidents or arson in Delhi and Rajasthan.

Large gatherings have been banned in several parts of Delhi along the border with Haryana.