Chief of Defence Staff General Bipin Rawat and Air Force Chief Air Marshal RKS Bhadauria today inducted South India's first squadron of multirole Sukhoi-30MKI fighter jets, modified to carry BrahMos supersonic cruise missiles. The squadron will be based at the Air Force Base in Tamil Nadu's Thanjavur and will provide the country with a new lethal weapons platform that will fulfil both aerial and maritime roles and guard the Indian Ocean region (IOR).

With the BrahMos missile, which has a range of around 300 kilometres, the Sukhoi-30MKI squadron will be able to strike at targets deep in the IOR. The squadron will initially have between five and six jets before scaling up to the full complement of 18.

The Air Chief said the integration of BrahMos with the SU-30MKI was a "fully indigenous" process conducted by BrahMos Aerospace, HAL (Hindustan Aeronautics Limited) and the Air Force.

In a dramatic video shared by news agency ANI, one of the Sukhoi Su-30MKI jets can be seen slowly taxiing through two crossed streams of a water salute.

This will be the IAF's second front-line fighter jet squadron to be based in the south.

#WATCH Water salute being given to the SU-30MKI fighter aircraft at the induction of the 222 ‘Tigersharks' fighter squadron at the Thanjavur air base. pic.twitter.com/pMO9ugtZgO

"Triple two squadron has been resurrected with the SU-30 MKI aircraft. It is armed with the BrahMos missile. By virtue of the fact that it is located in Thanjavur, which is strategically very well located in the southern peninsula. from where it can dominate the seas, provide very close and integrated support to the Indian Navy," General Rawat told news agency ANI.

"The Thiruvananthapuram Air Force airbase will play a crucial role... expansion plans here are on the anvil and additional land is being acquired, next to the present base. We expect to complete the expansion in around four years' time," the Air Marshal added. 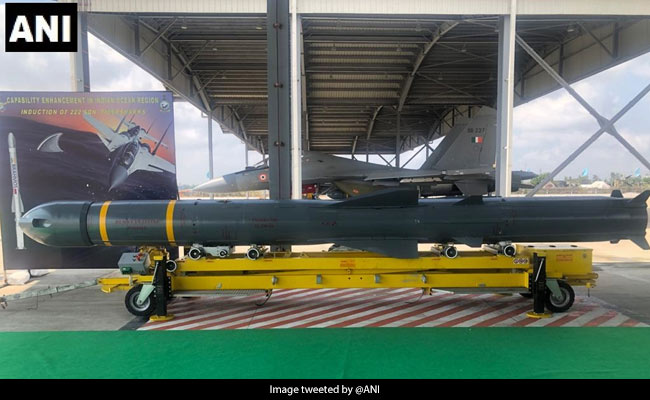 The 222 Squadron that will house the Sukhoi-30MKIs is also known as the 'Tigersharks' and was first raised at the IAF's Ambala station in Haryana in September 1969, with Sukhoi Su-7s - a swept-wing fighter jet.

In July 1971 the squadron moved to the Air Force station in Punjab's Halwara and took part in the 1971 war with Pakistan. It was recognized for its efforts and awarded one Mahavir Chakra, three Vir Chakras and three Vayu Sena medals.

In December 1985, the 'Tigersharks' were the first squadron to be equipped with MiG-27s.

The squadron was officially decommissioned in 2011.