"Someone In Crowd Fired 7-8 Rounds": Delhi Cop Injured In Violence

The Sub-Inspector, however, said he could not see who was the assailant. He also did not notice what triggered the fight and who started it.

A sub-inspector shot in the arm during violence in Delhi.

Medalal Meena, the Delhi Police Sub-Inspector injured in last night's violence during a religious procession, said the police had initially separated the two communities when altercation broke out between them outside a mosque in Jahangirpuri. The Hanuman Jayanti procession was made to go one way and the Muslims another but they came face to face after a while and the police were caught in between. Eight policemen and a civilian were injured in the violence. Mr Meena was shot in the arm.

The police have arrested 14 men in the case so far. Among them is Aslam, who, the police say, shot at Sub-Inspector Meena. A country-made pistol has been recovered from him. Another man, Ansar, who started the quarrel, has also been arrested, the police said.

Mr Meena said he was on duty at the back of the procession but came to the front when the altercation started. "An argument started at the front, I went there. It turned into a brawl. Then stone throwing started in front of mosque. But the staff separated the two groups.

The Hanuman Jayanti procession people were sent to G block side. Then they reached Kushal Chowk from there. Those coming from C block side were stopped there. Then there was peace. But then more crowd came with rods and swords, and more stone throwing started from among them. There were ladies gents and kids. Bullets were fired too. I was hit in my hand," he said.

The Sub-Inspector, however, said he could not see who was the assailant. He also did not notice what triggered the fight and who started it. 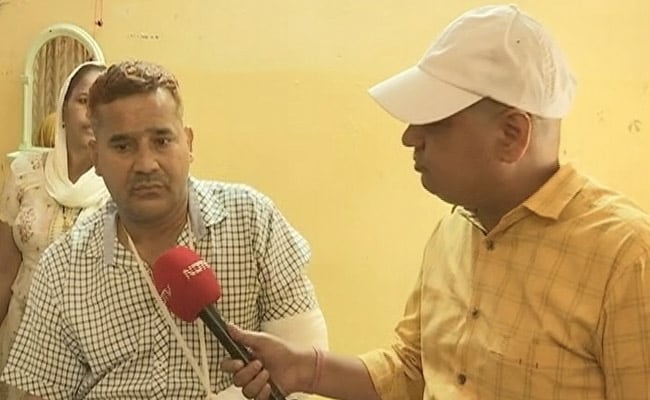 The Delhi cop who was shot in the arm

According to the First Information Report filed in the case, the rally was passing by a mosque when Ansar, allegedly started arguing with those participating in the rally.

The altercation soon escalated and both sides started throwing stones at each other, the FIR says.

A local resident, Noor Jahan, rejected allegations that the violence started from the mosque. This was the first time arms were wielded in a Hindu religious rally in the area, she said.

Last week, communal clashes broke out in four states - Gujarat, Madhya Pradesh, Jharkhand and West Bengal - during the celebrations of Ram Navami, the festival which marks the birth of Hindu God Ram.