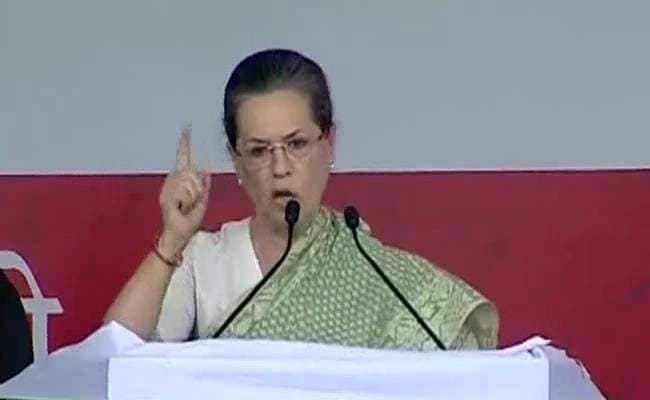 Patna: Congress Party chief Sonia Gandhi on Sunday lashed out at Prime Minister Narendra Modi, alleging that he had insulted the people of Bihar with his comments on DNA. Her latest attack on Mr Modi and his government at the 'Swabhiman Rally' in Patna, where she shared stage with top leaders of the Janata Dal (United), Rashtriya Janata Dal and Samajwadi Party.

"Some people take pleasure in mocking Bihar. Whenever they get opportunity they comment about its DNA and culture. They also call it BIMARU," she said, referring to Mr Modi's comments at a rally he addressed in Muzaffarpur in July.

She also picked a number of fronts on which he attacked the government, saying the Modi government was "doing nothing other than 'show-baazi'".

"Modi-government has completed one-fourth of its time. Till now, what has it done other than 'show-baazi'..It has done nothing. You know better than me," said Sonia Gandhi.

She attacked the BJP-led regime for not fulfilling its promise to provide employment to one crore people but also restricting job opportunities in the government and said the funds for major social security schemes like MGNREGA have been "heavily slashed".

She also attacked the government over its attempts to overhaul the land acquisition law. "This is an anti-farmer government. They want to grab their land and distribute it among their rich friends. We fought for the protection of farmers' rights in the Parliament and in the end government had to bow down," she asserted.

The Congress president also questioned the government's stand on Pakistan in the light of deaths of several army and paramilitary personnel and civilians in the firing from across the border.

"Earlier Prime Minister Modi used to lecture on Pakistan. Now when our jawans are being killed on border and people are being attacked, what is his policy on Pakistan? The Nation wants to know," she said in an apparent reference to the recent calling off of NSA-level talks between the two countries.

Holding Mr Modi responsible for economic crisis, Sonia Gandhi said that it is because of his mistakes that inflation has gone up. "Inflation is rising and value of money is declining. PM made only empty promises of a corruption-free India," she said.

Appreciating RJD chief Lalu Prasad for his contribution towards the development of the state, Gandhi said, "Congress contributed in taking the state forward. It gave approval to make policies. Lalu Prasad has also contributed, but the state needs more."