"Has He Been Charged, Sent To Jail?": Sheila Dikshit Backs Jagdish Tytler

Perhaps there was nothing negative to write about the event so they picked this up as something important, Sheila Dikshit said

Sheila Dikshit justified his presence saying "Jagdish Tytler came there like any other Congressman".

After 1984 anti-Sikh riots-accused Jagdish Tytler showed up at an event where Congress veteran Sheila Dikshit took charge as the chief of the party's Delhi unit, and sat in the front row, the grand-old party was accused of "again rubbing salt into the wounds of Sikhs".

But the three-time Chief Minister of Delhi has backed her colleague saying he hasn't been charged for anything. Plus he is a Congressman who has every right to attend a party event, she clarified.

"There is no controversy at all. Has he been charged for anything? Has he gone to jail? He hasn't left the party. He hasn't been chucked out of the Congress. He came there like any other Congressman. So why is everybody making an issue out of it, I don't understand," Ms Dikshit told NDTV.

The 80-year-old also lashed out at those trying to weave a controversy around Jagdish Tytler's attendance.

"Perhaps they didn't have anything negative to write about that meeting so they picked this up as something important," she said.

Jagdish Tytler also said that the charges against him have not been proved. "What can a man say when the court has given a verdict. You also mention my name. Why? Is there an FIR? Is there a case? No? Then why do you take my name? Someone said that and you believed it," he told reporters indignantly. 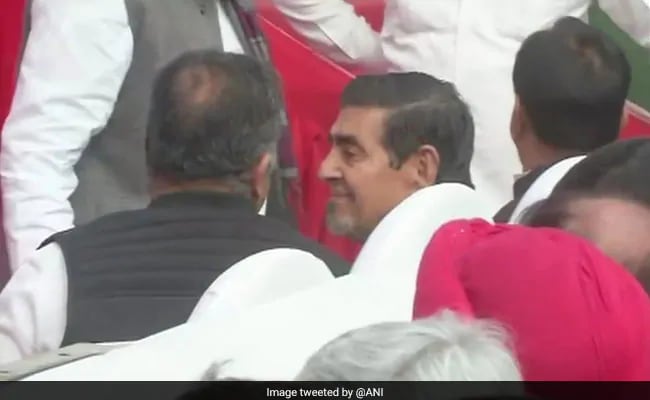 A former union minister and a known face from the national capital, Jagdish Tytler has been a dilemma for the Congress. He along with former Congress leader Sajjan Kumar was accused by riot victims of leading mobs against Sikhs in Delhi following the assassination of then Prime Minister Indira Gandhi by her Sikh bodyguards on October 31, 1984. At least 3,000 people were killed in the violence over the next four days.

He was inducted into Manmohan Singh's cabinet in 2004, but had to quit for his alleged role in the 1984 riots.

Last month, after Sajjan Kumar was convicted and ordered to spend life in prison by the Delhi High Court, demands for action against Jagdish Tytler and Kamal Nath, another Congress leader, re-emerged.

But Kamal Nath, who was also named by witnesses, was picked by Congress chief Rahul Gandhi as Madhya Pradesh chief minister prompting the BJP, the Akalis, the Aam Aadmi Party (AAP) and others to target the party for allegedly shielding its leaders accused in the anti-Sikh riots.

Arvind Kejriwal's AAP alleged that it exposed Congress's anti-Sikh face and demanded that the party leaders clear their stand on Jagdish Tytler.

"Indira Gandhi to Rajiv Gandhi to Rahul Gandhi, Tytler was their right hand man. It is a clear signal to Sikhs of the country," Union Minister Harsimrat Kaur Badal said.

"The Congress wants to send a message to the witnesses that the party high command supports Tytler and nobody should even try to testify against him," alleged Mr Sirsa.