Congress president polls: Shashi Tharoor with his manifesto after filing his papers on Friday.

Shashi Tharoor apologised "unconditionally" for a blunder in his manifesto for the Congress chief's election — a map of India in it did not have parts of Jammu and Kashmir, and Ladakh. He shared  corrected versions after social media users attacked him over it, particularly BJP supporters on Twitter where he has more than 8 million followers.

The Congress sought to distance itself from the "egregious error", trying to deflect the BJP's attacks on Rahul Gandhi's ongoing 'Bharat Jodo Yatra'.

Re the troll storm on a manifesto map: No one does such things on purpose. A small team of volunteers made a mistake. We rectified it immediately &I apologise unconditionally for the error. Here's the manifesto:
English: https://t.co/aKPpji9Z8M
Hindi: https://t.co/7tnkY9kTiO

"No one does such things on purpose," Mr Tharoor tweeted with links to the revised manifesto, saying that his team "made a mistake". "We rectified it immediately and and I apologise unconditionally," he added.

Social media users called the wrong map "a massive goof-up" and "a shameful act", with some accusing him of having "a divisive agenda". 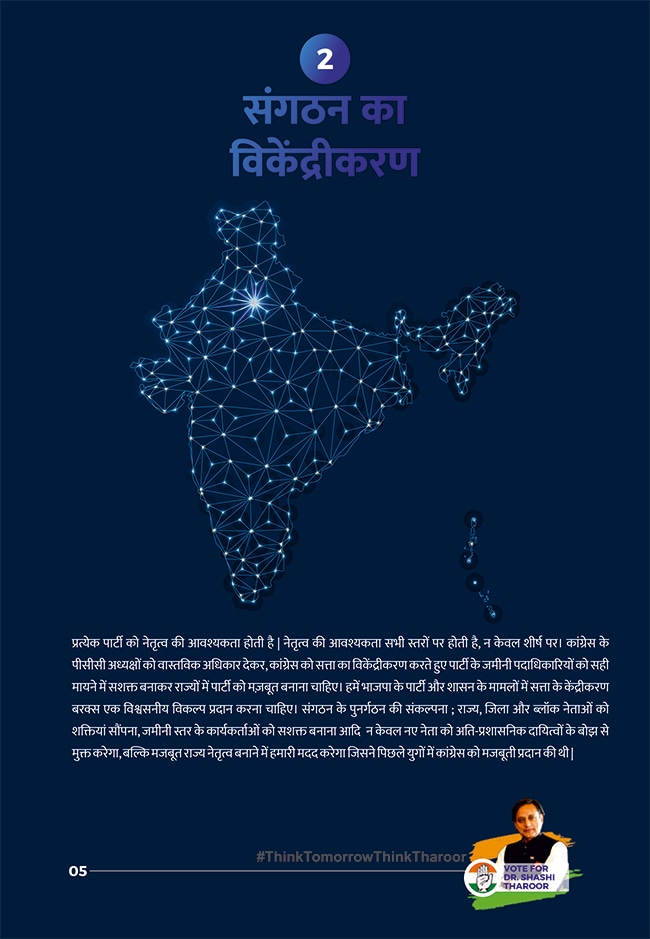 Since corrected, a wrong map of India in Shashi Tharoor's original manifesto.

The BJP is clearly panicking now that the Bharat Jodo Yatra has entered Karnataka. The “I Troll Cell” (IT Cell) of the BJP will look for any flimsy excuse to target and tarnish the #BharatJodoYatra and @RahulGandhi. Only Dr. Tharoor and his team can explain this egregious error. pic.twitter.com/3GMYj19js3

Mr Tharoor's apology came soon after. In the replies, a Twitter user said: "Don't you think you could have checked an important document like manifesto before its release? It's not even a big document." It's a 13-page document.

This was the second time in three years that Shashi Tharoor, a former union minister, landed in a map-in-a-booklet controversy. In December 2019, he shared publicity material about a Kerala Congress protest against the Citizenship Amendment Act (CAA), and that had a similar problem. He deleted that tweet after the BJP's IT Cell and leaders such as Sambit Patra went after him. He'd said the map was to "depict not the territory but the people of India".

In the latest row, in his manifesto booklet with the tagline 'Think Tomorrow, Think Tharoor', he used a map with a network of dots representing Congress units being across the expanse of India. It was different from India's official map that includes parts of Jammu, Kashmir and Ladakh occupied by Pakistan and China.

In the Congress polls, Shashi Tharoor is the main opponent of the party's Rajya Sabha leader, Mallikarjun Kharge, who is the frontrunner thanks to apparent backing of the Gandhis. Former Jharkhand minister KN Tripathi is the third candidate for the October 17 election, results of which will be declared two days later.

I have just submitted my nomination papers as a candidate for the presidential election of @incindia. It is a privilege to serve the only party in India with an open democratic process to choose its leader. Greatly appreciate Soniaji's guidance&vision.#ThinkTomorrowThinkTharoorpic.twitter.com/4HM4Xq3XIO

This is the first Congress chief election in over 20 years in which a Gandhi — current interim chief Sonia Gandhi and her son, MP Rahul Gandhi — aren't contesting. In fact the family, in an apparent counter to nepotism charges, insisted that a non-Gandhi take up the job.