If the NCP and the Congress do not tie up, then Shankarsinh Vaghela's entry can lead to a three-way fight between the Congress, BJP and NCP on some seats in Gujarat in the national election due by May. 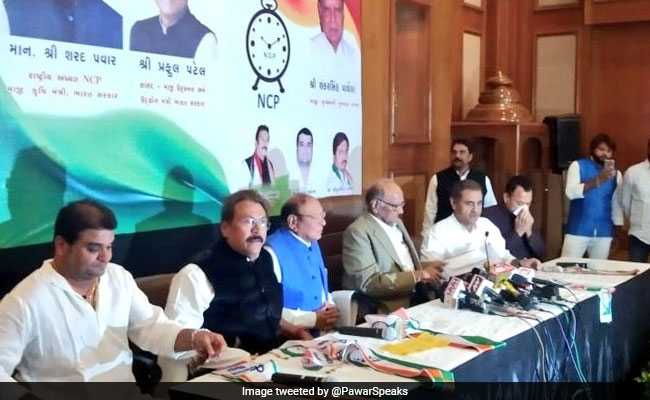 Asked whether he would fight the election, Shankarsinh Vaghela said it was for the NCP to decide

Shankarsinh Vaghela, 78, quit the Congress in 2017, months before the Gujarat election. He had joined the party after quitting the BJP in 1996.

He did not go back to the BJP and put up independent candidates for the Gujarat polls; all lost.

While being welcomed into the NCP by Sharad Pawar, Mr Vaghela called Prime Minister Narendra Modi's government "cruel and corrupt".

"The people of Gujarat have given me immense love and I want to give it back to them, that is why I am joining NCP. In coming times I can see an anti-BJP government, similar to UPA-3 in the country," said Mr Vaghela.

If the NCP and the Congress do not tie up, then Mr Vaghela's entry can lead to a three-way fight between the Congress, BJP and NCP on some seats in Gujarat in the national election due by May. The BJP won all 26 of Gujarat's parliamentary seats in the 2014 elections.

"At a time democracy is under threat in India under BJP's rule, I have decided to join the NCP to fight against BJP and strengthen the hands of anti-BJP forces," Mr Vaghela said after joining Pawar's party.

Sharad Pawar said his party would use Mr Vaghela's political experience and mass following in Gujarat as well as for the party's national development.

Asked whether he would fight the election, Mr Vaghela said it was for his party to decide.

Sharad Pawar said: "I have asked Vaghela to not only concentrate on Gujarat but also contribute towards national development of NCP. He will be national general secretary of the party. In Gujarat we want to strengthen anti-BJP forces and by bringing in Vaghela, we have
tried to do that."

In 1996, Mr Vaghela quit the BJP after engineering a split in the ranks, upset over being denied chief ministership in favour of Keshubhai Patel.

Later he became Chief Minister with outside support from the Congress.

He also served as a union minister in the Manmohan Singh-led Congress government at the centre.