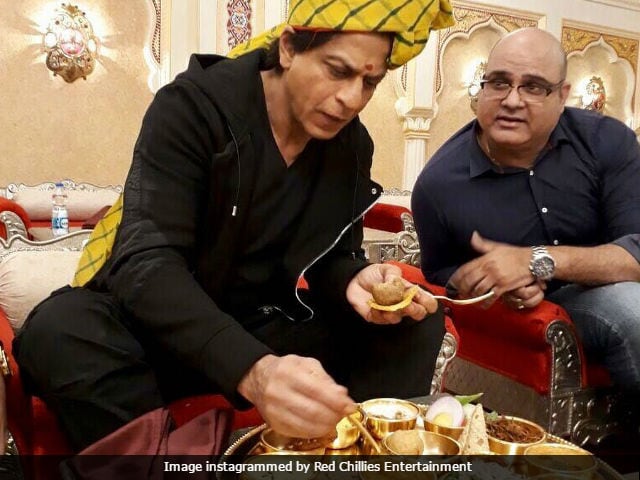 Mumbai: Shah Rukh Khan, who is promoting his upcoming film Jab Harry Met Sejal in various in Indian cities, stopped over in Jaipur, Rajasthan, where he treated himself to authentic Rajasthani cuisine. SRK's Red Chillies Entertainment instagrammed pictures of the 51-year-old actor tasting Dal Baati for the first tim e and wrote in caption: "Harry's tour continues with the royal taste of Rajasthan. It's time for some Dal Baati and a plate full of delicacies." In a statement, Shah Rukh added: "I had just heard of Dal Baati. It's fantastic and really nice. I wonder how people finish this food. It's really filling and very tasty. For me, it's a first-time experience. Now, I will come here once in three months at least," reports news agency IANS.

Shah Rukh enjoyed his meal at a Rajasthani restaurant, which created a royal ambience to welcome the Raeesactor. Shah Rukh was given a formal welcome and he was presented a pagdi, Rajputana sword and garland upon his arrival. Singers were invited to recreate Shah Rukh's iconic songs with a Rajasthani twist.

Before Jaipur, Shah Rukh made a stop in Jodhpur, where he received the Honorary Membership from the Jodhpur Tourist Guide Association. Shah Rukh plays the role of a tour guide in the Imtiaz Ali-directed Jab Harry Met Sejal. "Ma Ma main Guide ban gaya (honorary) Jodhpur Tourism Guide Assoc Thx for making Harry a part of ur family (sic)," Shah Rukh tweeted along with a picture collage from the felicitation ceremony.