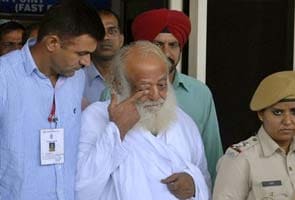 Spiritual leader Asaram Bapu with the police at Jodhpur prison

Jodhpur: Religious preacher Asaram Bapu, who has been accused of sexually assaulting a schoolgirl in one of his ashrams, today blamed the media for his arrest and sought bail on grounds that he was unwell.

The 75-year-old has to spend his second night in the Jodhpur Central jail as a hearing on his bail plea will continue tomorrow.

"It is because of you, the media, that the police hurriedly completed the investigation and my client was arrested," said Asaram Bapu's lawyer, who had cited 'trial by media' in the court hearing.

Asaram Bapu has been placed in the barracks right next to the jail dispensary. Sources said he refused to drink any water without adding drops from his bottle of 'gangajal' or holy Ganga water.

On Monday night, clashes broke out between police and Asaram Bapu's supporters outside the prison, where the preacher was moved after a local court sent him to 14-day judicial custody.

The police said Asaram Bapu is "lying" about a neurological condition that gave him headaches, and doctors had found him medically fit. The cops also said he is capable of sexual assault - he cleared a "potency test".

The spiritual leader who teaches yoga and meditation was arrested from his ashram in Indore on Saturday night. He says he is innocent and denies that on August 15, he spent nearly an hour alone with the 16-year-old complainant at his ashram in Jodhpur.

He has told the police that instead, he met the girl and her family as part of the massive crowd that gathered for his 'satsang' or religious discourse.

Promoted
Listen to the latest songs, only on JioSaavn.com
But the police say they have sufficient evidence and have corroborated the girl's statement.