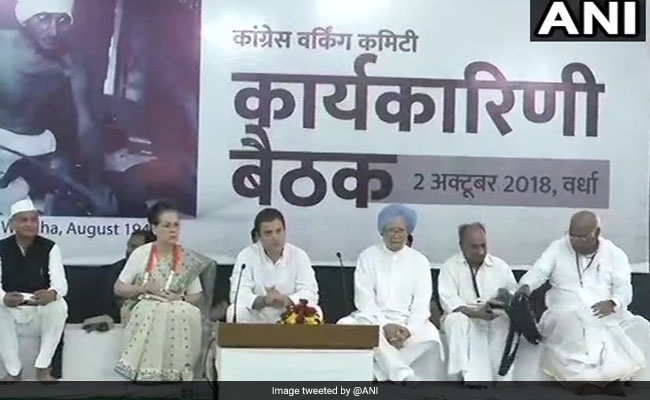 The Congress Working Committee (CWC) today called for a "second freedom struggle" against the Modi government to combat the ideology of "hate and violence", saying the same reason had led to the assassination of Mahatma Gandhi.

The meeting organized at Mahadev Bhavan, Sevagram Ashram, in Wardha district of Maharashtra on the 149th birth anniversary of Mahatma Gandhi, the CWC also condemned the use of force against protesting farmers on their way to the national capital.

"(Former prime minister) Lal Bahadur Shastri's call of 'Jai Jawan Jai Kisan' is not just a slogan but a way of life. We will continue to fight for farmers' rights," he said.

Mr Surjewala said the second freedom struggle will be against the Modi government for practising politics of "hatred, divisiveness, fear, polarisation, crushing dissent and debates".

"The Modi government is against India's plurality and is indulging in politics of revenge, falsehood and betrayal. It is easy to talk about Gandhiji in speeches. It's just political opportunism," he said.

The CWC underscored the hypocrisy of those who vilified Gandhi and his thoughts, but are brazenly championing it now, he said.

"The second freedom struggle will be against the government that practices politics of hate, vendetta, threat, murder, intimidation, crushing healthy debate and dissent," he said.

"Farmers who had come to seek grievance redressal were beaten up and lathi charged. Water canons and tear gas was also used. We condemn the autocratic Modi government and the prime minister who is drunk with power. We express solidarity with the farmers and resolve to redress their grievances if voted to power," he said.

The CWC meeting was presided over by Congress president Rahul Gandhi and attended among others by UPA chairperson Sonia Gandhi and former prime minister Manmohan Singh.