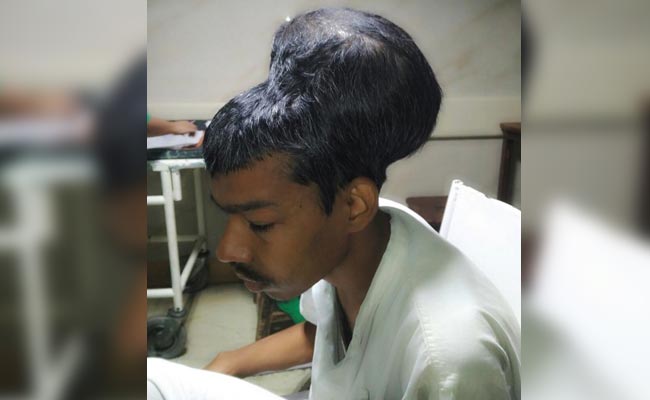 For the past several years, Santlal Pal had been watching a tumor emerge from his skull.

It may have been the largest tumor in the world. But now it is gone: Doctors successfully removed the mass during an intensive, six-hour operation on Valentine's Day.

Trimurti Nadkarni, head of the neurosurgery department at Nair Hospital in Mumbai, told the Indian Express that the tumor "sat like a head on top of another head." Surgeons "had to cut through the bone," Nadkarni said. "The sheer size of the tumor was a challenge, and we had to ensure blood pressure was maintained while surgery was on."

More than a week after the surgery, Nadkarni told BBC News that Pal, a 31-year-old shopkeeper in the state of Uttar Pradesh, is "out of danger. Now it's a matter of recovery." 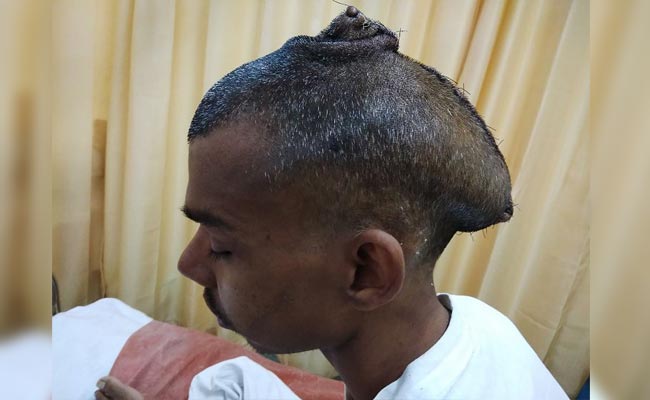 Santlal Pal's tumour had been growing for several years

The Hindu news site reported that Pal's brain tumor had been growing for several years - most rapidly in the past year. The mass was clinging to the back of Pal's head; his skull and hair grew over the top of it. The mass appeared as large or larger than Santlal Pal's head.

"In a month, it grew over an inch," his brother Akhilesh Pal told the Indian Express.

Following treatment, including chemotherapy, the mass continued to grow, Akhilesh Pal said. "He would feel a heaviness in his head, which ached constantly, and his vision was blurred," he told the newspaper.

Pal's wife, Manju, told the Hindu that the couple consulted several doctors in Uttar Pradesh but were told that the tumor was inoperable.

Doctors said about 10 percent of the tumor was growing within Pal's skull, putting pressure on his brain and causing him to lose his eyesight; if not treated successfully, it could have caused neurological damage or paralysis.

Surgeons at Nair Hospital took it on.

"We had to cut open the scalp and remove the tumor," Nadkarni, the neurosurgeon, told the Hindu. "The part of the tumor within the skull was removed by making an opening in the skull."

Nadkarni said Pal received 11 units of blood during the operation and that, for three days following the procedure, he had to be on a ventilator to breathe. "Such cases are critical," the surgeon told the BBC. 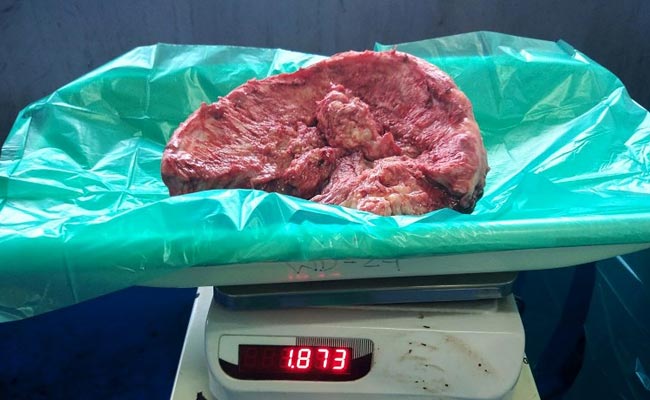 Doctors successfully removed the tumour during an intensive, six-hour operation on Valentine's Day

Doctors are now waiting to see whether Pal will regain his eyesight. "We are praying that he regains his vision," Pal's wife told the Hindu.

There are numerous types of brain tumors, and surgical removal has its own risks.

According to the Mayo Clinic:

In some cases, tumors are small and easy to separate from surrounding brain tissue, which makes complete surgical removal possible. In other cases, tumors can't be separated from surrounding tissue or they're located near sensitive areas in your brain, making surgery risky. In these situations your doctor removes as much of the tumor as is safe.

Even removing a portion of the brain tumor may help reduce your signs and symptoms.

Surgery to remove a brain tumor carries risks, such as infection and bleeding. Other risks may depend on the part of your brain where your tumor is located. For instance, surgery on a tumor near nerves that connect to your eyes may carry a risk of vision loss.

Promoted
Listen to the latest songs, only on JioSaavn.com
Srikant Balasubramaniam, with the neurosurgery department at Nair Hospital, told the Indian Express that the medical center treats about 500 brain tumors per year, half of which are in advanced stages. "The tumor in Pal's head grew so much because his surgery was delayed," he said.

Mayawati's Party BSP To Keep Away From Constitution Day Programs